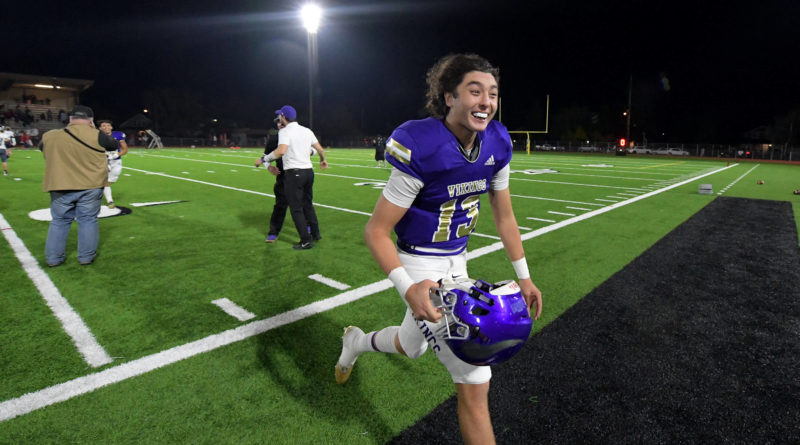 The original was pretty good — Union’s 38-31 victory over Puyallup in Vancouver in Week 5 of the 2018 regular season.

The sequel had equal the suspense, but the same result in the Class 4A semifinals — a Titans’ 35-28 victory at McKenzie Stadium.

But the third chapter?

It was easily the best of them all.

Seeing all of its three-touchdown lead in the fourth quarter evaporate, No. 9 Puyallup finally survived, 42-41, when the Titans’ longer-than-usual PAT kick missed wide left with no time remaining Saturday night at Sparks Stadium.

After Union scored a touchdown on C.J. Jordan’s 8-yard fourth-down strike to Tobias Merriweather on an untimed down, the Titans decided to go for the win on a two-point conversion.

Jordan ran it in off a scramble play, but Union was called for a block-in-the-back penalty.

Union’s Sonny Pitts came on for what turned out to be a 35-yard PAT attempt, but the kick came out low and left.

Here are five takeaways from the Puyallup-Union game:

BOTH FIRST-YEAR QUARTERBACKS HAD A BREAKTHROUGH ON THE SAME NIGHT

The first month of the season had been an up-and-down affair for Jordan, a transfer from Clackamas (Ore.) High School, and Puyallup’s Luke Holcomb, who took over the starting job for Jacob, his graduated all-state brother.

Both had experienced highs and lows through the first four games.

Jordan was sensational in leading the Titans back from a 35-14 deficit with a pair of fourth-quarter touchdown runs (1, 3 yards) – and the final bullet-pass to Merriweather near the right corner of the end zone.

The senior finished with 104 rushing yards and three touchdowns, and completing 19 of 31 passes for 258 yards and another score.

“I think he proved that he is our guy and can lead this team,” Union coach Rory Rosenbach sad. “We will go as far as he can take us.”

Holcomb was equally impressive, especially in the first half when his touch and placement on deep passes was the best it had been all season. The Vikings’ junior was 20-for-29 for 213 yards and a touchdown.

“He did a nice job for us,” Puyallup coach Gary Jeffers said.

THAT ANNOYING UNION CHEERING-SECTION BANNER FIRED UP THE VIKINGS

More-than-pleased Union fans remembered both Titans’ victories last season. And one hung a banner on the rail of the visiting grandstands Saturday that read, “So Nice We Did It Twice.”

Union was so close to making it three fourth-quarter comeback victories.

“It was the second half when I saw it,” Puyallup tight end Isaac Clark said. “That gave me fire. That made me (mad). I thought, ‘There is no way we can let that happen.’ We did everything we could to win this game.”

Jeffers saw how his team crumbled in the fourth quarter of both games last season.

JEFFERS’ TRICKERY PROVED TO BE THE FOURTH-QUARTER TONIC PUYALLUP NEEDED

And after a kickoff-return miscue that led to Jordan’s 3-yard touchdown run tied the game at 35-35 with 5:33 to go, this time the Vikings stayed on point.

They ran the football on eight consecutive plays, driving to the Titans’ 29 with 2:30 to go.

The ninth play was a thing of beauty: Running back Kyler Johnson took a pitch to the outside right. The entire Union defense came crashing down to where he was.

Johnson stopped, and rifled a pass to a wide-open Jordan Dwyer for a 29-yard touchdown, giving the Vikings a 42-35 lead.

“We’ve had it (the running-back pass) in for a couple of weeks,” Jeffers said. “And he is actually our backup quarterback.”

AND WHILE WE’RE AT IT – WELCOME BACK, KYLER JOHNSON!

The senior came into this season as the team’s top tailback, but had been in and out of the lineup with a knee issue.

Isaiah Dickerson filled in admirably in a full-time role. But having Johnson back as more of a power runner on the inside gave the Vikings a lethal 1-2 punch.

“Kyler is a senior leader, a two-year starter and a guy you want on the field,” Jeffers said. “It is hard for a defense to adjust between the two runners.”

SO WHAT’S NEXT – A FOURTH INSTALLMENT?

The weird thing is that Union plays in the 4A Greater St. Helens League, and Puyallup is a member of the 4A SPSL.

But these three matchups have been so action-packed – and suspenseful – that both coaches just grinned at what unfolded again Saturday night.

In theory, they could meet again at some juncture of the 4A playoffs in November.

Added Jeffers, who finally experienced the winning feeling Saturday after two heartbreaking losses a season ago.

“It is all about overcoming adversity,” Jeffers said. “That is what the game of football is all about.”