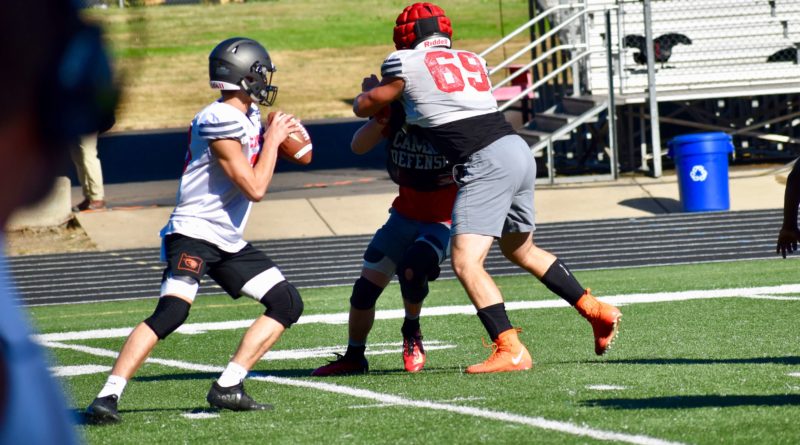 CAMAS — During its recent Monday afternoon film session, Camas head coach Jon Eagle, going in-depth on the little things that made up its triumphant run game the previous Friday, is intermixing playful banter between plays.

“We know we can mess with each other,” senior lineman Tristan Souza said. “If we make a mistake, someone gets pancaked, we’re going to make fun of you for a second, then we’re going to hype you up the next time when we see you pancake someone.

But the Papermakers have seen much more good than bad on film in the first four weeks of the season. Especially when it comes to their run game, which has been more of an emphasis than the past two seasons.

Eagle rebuffs the notion that just because his line is just big — all of them between 250 and 300 pounds, and most well over six feet tall. They also have experience in the system, are technically sound and mostly all grew up playing together, with the exception of USC commit Caadyn Stephen, who moved from Alaska before his junior year.

Behind its sound line, Camas’ run game has flourished as the No. 5 Papermakers have established themselves as one of the top teams in the state. That’s no accident.

And it has led to a breakout season for junior Jacques Badolato-Birdsell. The running back has 582 yards and 10 touchdowns on 9.1 yards per carry through four games, according to data compiled by The Columbian, including four touchdowns performances against Hazen and West Valley (Yakima).

It’s noteworthy that Camas’ flourishing run game (1,041 yards this season) is a departure from the Papermakers of recent years.

But the 2016 team that won the 4A state championship had a hard-nosed running quarterback in Jack Colletto (now at Oregon State) and league MVP running back Blake Mitchell (now a linebacker at Montana). And Eagle will have you remember the 2013 team that lost to Chiawana in the finals, which was led by Nate Beasley’s 60-some career touchdowns.

Eagle said Badolato-Birdsell is really strong, has a good burst of speed, a good first few steps and a knack for finding the hole.

“He’s going to be even better when he finishes” Eagle said, “ and he is very good at using his blocks. Some kids have no idea how things are blocked. I can think of some running backs in our league who have no clue who’s running in front of them.”

Badolato-Birdsell, who moved to Camas from the Democratic Republic of Congo after he was adopted in 2011, said he feels he’s been waiting for his moment, and credits his offensive line for “literally doing all of the hard work creating holes.”

Souza says the key to the line’s success has been depth. Last week, the team’s highest-project prospect Stephen missed the Bellevue game with a back injury. Souza, who played left tackle as a sophomore, slid over and filled in, and the Papermakers didn’t forfeit anything. Souza holds an offer from Northern Colorado and senior OL Rush Reimer is a Montana State commit in addition to Stephen’s higher-profile recruitment.

“One thing about (offensive line coach Justen) Wochnick is he makes sure everyone knows the plays at every position,” Souza said. “Center, guard, tackle — it makes us more dynamic.”

Off the field, players say there has been a more concerted effort to do things as a team, as opposed to just spending time with position groups, which has resulted in this year’s team feeling more tight-knit.

Camas’ season-long slogan has been the “Revenge Tour,” alluding to its 5-5 finish last season, and first time missing the playoffs in eight years. So far, its resume lives up to that motto. The Papermakers have beat Lincoln (Tacoma) and Bellevue — both teams that they lost to last season. In week five, they will get the chance to avenge a 2018 loss against Sumner, too.

It’s a fitting motto for a team that brought back a large cadre of its starting lineup from a year ago.

“It’s been amazing to see what we can handle,” Badolato-Birdsell said. “Whatever’s thrown at us, we’re ready for it. This year we wanted to get our revenge from whatever team beat us last year. We weren’t satisfied with what happened last year.”

Andy Buhler is a reporter for Scorebook Live Washington. Hear him weekly on the Scorebook Live Today podcast, follow him on Twitter @AndyBuhler and email him at andy@scorebooklive.com.