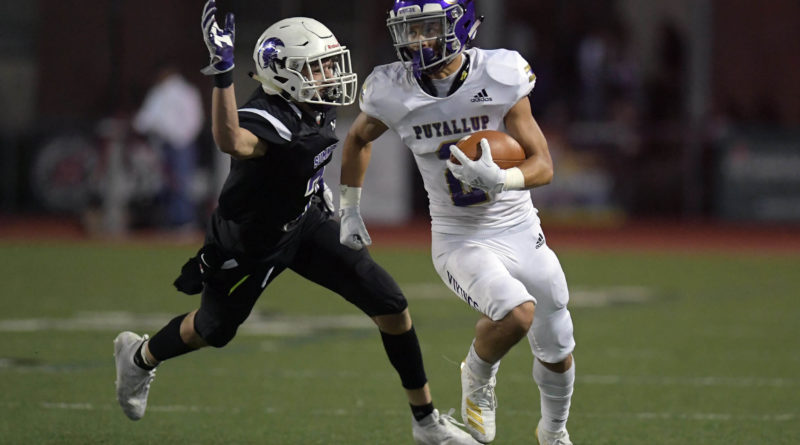 Here is an inside look at the top high school football games across the state of Washington in week five:

Game nugget: The only 4A GSL team that Mead coach Benji Sonnichsen is winless against is Gonzaga Prep (0-4).

About the Panthers: You can talk all the offense you want – and Mead has that with QB Ryan Blair (70-for-105, 903 yards, 12 TDs) and RB Caleb Shawen (37 rushes, 539 yards, five TDs). But the key is whether or not the defense can find.a way to slow down Gonzaga Prep’s triple-option offense, which rolled up 501 yards in last year’s 50-18 victory at Joe Albi Stadium.

About the Bullpups: The longer you let this young Gonzaga Prep group hang around in the 4A GSL race, the tougher it will be to eliminate the Bullpups – who won the Class 4A crown in 2015. They rotate two quarterbacks, usually with senior QB Jake Keyes starting the game – and sophomore QB Ryan McKenna (80 rushes, 366 yards, three TDs), the coach’s son, finishing it.

About the Wildcats: Mount Si, a 4A title contender? The Wildcats have certainly looked the part playing a brutally-difficult early-season stretch of games, including a last-minute 10-7 loss Saturday at No. 2 Woodinville. But how many more big hits can QB Clay Millen (87-for-130, 921 yards, eight TDs) absorb in the pocket? Mount Si cannot afford to lose his toughness or leadership – or production.

About the Wolves: When it’s all said and done, Eastlake’s season-opening loss to Monroe might be the best thing that happened to the program. Since that loss, the Wolves have come alive – especially QB Grady Robison, a Montana State commit who is coming off a four-touchdown effort last week against Issaquah.

Game nugget: Prairie has not beat 3A Greater St. Helens juggernaut Kelso since 2011, when it won a resounding 49-0. But now the Falcons are off to a 4-0 start for the first time in decades. That puts them on a crash course with fellow undefeated Kelso (4-0).

About the Hilanders: Kelso is a formidable 4-0 and up to this point, has yet to face much of a challenge. The Hilanders beat area opponents Mark Morris and R.A. Long a combined 110-0 in weeks one and two, toppled 4A side Heritage 41-7 in week three and beat Aberdeen on forfeit last Friday, reportedly due to safety concerns rooted in Kelso’s size and strength. The Hilanders, after all, are both. Senior running back and linebacker Josh Webb was a first team all-league selection at both as a junior, and linebacker/OL Seth Sutherby presents another physical force in the middle for Kelso. Led by athletic QB/DB Marshall Coleman, the Kelso offense has thus proved it can score. Five starters on each side of the ball return from last year’s team, which finished second in league and lost shy of the 3A state playoffs. The only 3A GSHL team that returns more experience? The Prairie Falcons, who will present Kelso’s toughest challenge so far this season.

About the Falcons: The Falcons set the building blocks in 2018, Mike Peck’s first year, when they went 5-5, the first non-losing season since 2011 — which is also the last year Prairie beat Kelso. But through nearly a season and a half, Peck has won more than he’s lost as Prairie’s head coach. And it’s a decidedly different brand of football under the first-time head coach. Prairie’s spread offense is helmed by quarterback A.J. Dixson, a three-sport athlete who has excelled in the system over the last two seasons. In a 56-14 week three win over Black Hills, Dixson threw for 364 yards and seven total touchdowns — two on the ground — in just three quarters of play. And his favorite target? Twin brother Zeke Dixson, who has 185 yards in the air on the season, per The Columbian. It helps, too, the former Dixson has experienced offensive linemen Brody Schlaefli, Christian Lowry and Tim Banaszek blocking for him. Peck says to expect a packed stadium on Friday.

Game nugget: Napavine coach Josh Fay sure knows how to beat his alma mater. Before last year’s regular-season loss to the Pirates, Napavine had won six games in a row in the series.

About the Pirates: The biggest question coming in – how healthy is the non-throwing shoulder of QB Braden Thomas (23-for-37, 387 yards, three TDs; 233 rushing yards, four TDs)? He was hurt two weeks ago against Kalama, and saw limited carries last week against Toledo. If he is limited to just being a passer, Adna will likely increased the workload of RB Cole Fay (57 rushes, 432 yards, eight TDs) in the run game.

About the Tigers: Few 2B teams can match Napavine’s size up front. The Pirates can’t, which is the biggest reason why they will likely crowd the line of scrimmage to keep the Tigers’ rushing attack bottled up. That should open up big-play opportunities in the passing game for QB Laythan Demarest (26-for-46, 346 yards, three TDs; 41 carries, 556 yards, 13 TDs), who has been a nightmare matchup for defenses.

Game nugget: Rematch of the 2018 4A state semifinals, when Union beat Puyallup 35-28 in a come-from-behind instant classic. Union beat Puyallup last season in comeback fashion twice. Union’s now-starting running back Isaiah Jones broke loose for a pivotal 55-yard touchdown to set up the comeback in the teams’ first matchup in 2018.

About the Titans: They aren’t the Titans of last year, after graduating 16 starters from the best team in program history, but they proved last week they can win. Union’s last two weeks marked an irrefutable low point, followed by a marked high note. The defending 4A champion Titans had their 16-game win streak shattered by Eastlake, 31-8 on the road, then had to come back home to host highly-ranked Chiawana. Union responded with a gutsy 21-20 win paced by backup quarterback Alex Gehrmann and quarterback-turned-wideout Jake Bowen, who caught two touchdown passes from his fellow junior. Starting quarterback Caleb ‘CJ’ Jordan, who missed the week four bout with a concussion suffered against Eastlake, will likely return. Jordan’s dual-threat capabilities give the Titans a different dimension, especially when mixed with Isaiah Jones, who has come on strong as a runner as the Titans top back this season. Union put up 41 points on 2A power Steilacoom in week two, but otherwise hasn’t filled the scoreboard as much as years past. That should make for an enticing showdown with a Puyallup team that is also slightly down from last year.

About the Vikings: A year ago, the Vikings were in position to beat Union twice in the fourth quarter, but both times, the Titans prevailed, ultimately knocking the Vikings out of the 4A state playoffs. Now the Vikings have a shot at revenge on their own home turf. No, this is not the Puyallup of last year. But the Vikings have played like a top-two team in the 4A South Puget Sound League up to this point. They beat Bellarmine and Emerald Ridge handily to start the season. Then after beating Sumner in week three, the Vikings turned around and lost to a strong, physical No. 3 Graham-Kapowsin last week, 27-13. Puyallup struggled to protect quarterback Luke Holcomb, who was sacked five times, and he threw the ball just 19 times — 10 of those completions. Union may not present the issues G-K did up front, especially if the Titans are down two starting D-linemen like they were last week. And the Vikings defense should present problems for a young Union offense, namely its linebacker corps led by Danny Uluilakepa and Isaac Clark.