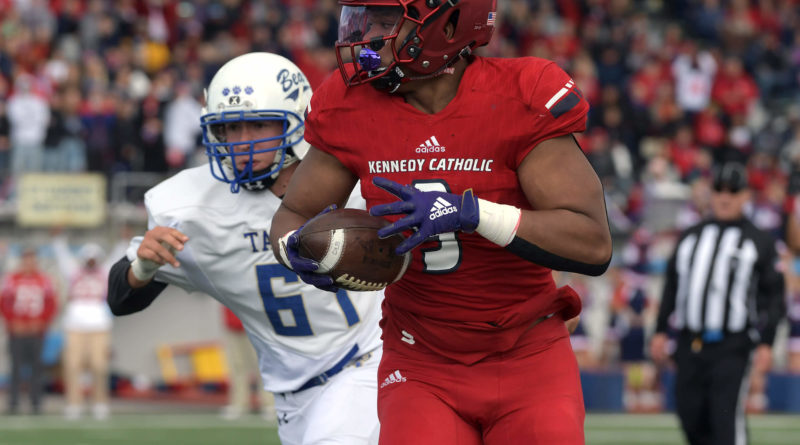 For the next couple of weeks, including Saturday, fourth-ranked Kennedy Catholic will run the gauntlet of undefeated 4A NPSL teams.

The first one crashed down like a ton of bricks.

Junior Sam Huard threw for 405 yards and five touchdown passes, all to Junior Alexander, and the Lancers walloped Tahoma, 48-0, at Highline District Stadium.

Last week, they blanked Bishop Blanchet, 50-0, on the road.

Here are five takeaways from the Kennedy Catholic-Tahoma game:

When Junior Alexander eats, he feasts

Huard and Alexander have history together. They have been a passing combination since eighth grade.

Alexander had a career day Saturday with nine receptions for 172 yards and five touchdowns (which is thought, but not confirmed, to be a single-game school record).

All eight of Alexander’s touchdown receptions have come in two games at Highline District Stadium.

What this recent UW commit did was certainly a ‘Smalls’ task

On Friday, Lancers’ defensive end Sav’ell Smalls, the state’s top class of 2020 recruit (and top-10 nationally), survived a few nerves in declaring an oral commitment to the University of Washington.

On Saturday, he was just doing his job in containing Tahoma’s fly-sweep run in the first quarter – and was presented a gift-wrapped highlight.

“I drifted out to (defend) the fly … and (Tahoma quarterback Michael Palandri) pulled it back,” Smalls said. “I backed up and thought maybe he will throw it. I didn’t know he’d throw it right to me – I thought I’d have to jump for it. But it hit my chest. I was gone.”

His 16-yard interception return for a touchdown was his second career defensive score – and first with the Lancers. He had a pick-6 as a sophomore at Garfield High School.

Aghast over another 400-yard passing day? Sam Huard knows it cam be even better

Huard posted his second 400-yard passing effort of the season Saturday in the victory over the Bears.

Most quarterbacks would take that kind of effort (29 of 42, 405 yards, five TDs) and celebrate with family.

Huard smiled. Throwing a red-zone interception, taking two sacks and appearing a little bit off with his passes, the junior knew it was an average day at the office.

“We got the job done,” said Huard, who sat out the entire fourth quarter. “You want to chase perfection. It’s still early on in the season, and we are still cleaning stuff up.”

When you are given the short field against the Lancers, you better make them pay

Tahoma had two starting first-half drives inside the Kennedy Catholic 30-yard line, and did not score.

The first one came in the first few seconds after the Bears jumped on the squibbed opening kickoff, taking over at the Lancers’ 28.

But on fourth-and-6, running back Jake Trost was held short of the first down.

And after a Kennedy Catholic fumble late in the first quarter, the Bears started at the Lancers’ 27 – and drove all the way to the goal line.

But after three no-gain runs, Tahoma faced fourth and goal. Palandri’s pass was batted down in the flat by Kennedy Catholic’s Riley Maroni.

“We had our opportunities against a really good football team,” Bears coach Tony Davis said.

Last week, the Lancers gave up 2 yards of offense to Blanchet.

On Saturday, they held Tahoma to 24 first-half yards on 32 snaps. They also forced four turnovers.

“It is the most improved defense in the state,” Cross said. “And now, it is starting to feel like when we show up, we are the ones saying, ‘This is how the game will go.’”