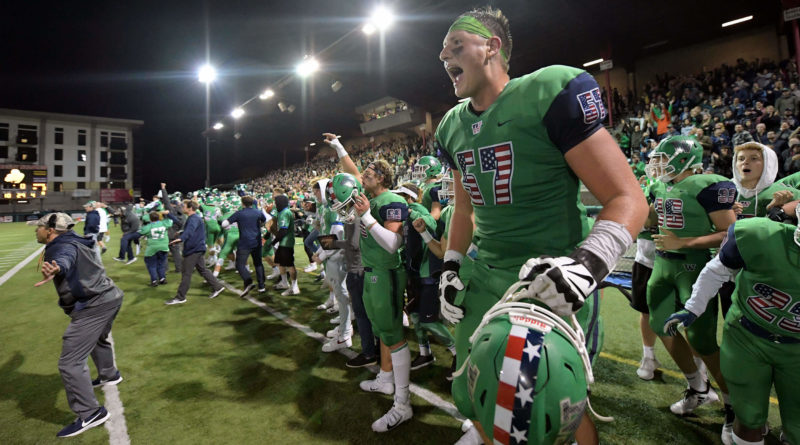 BOTHELL — Joey Johnson punched in a one-yard touchdown run with 27 seconds left to lift Woodinville over Mount Si 7-3 in a 4A KingCo Crossover game on Saturday night at Pop Keeney Stadium.

Buoyed by a sturdy line, Johnson’s run was the deciding play in a near stalemate as both teams kept the other offense at bay.

“We were seconds away from losing,” Woodinville guard Levi Rogers said. “Seeing it go through felt good.”

Mount Si’s Colby Ramsey kicked a 33-yard field goal late in the third quarter to put the Wildcats ahead until the final minute.

After Woodinville’s touchdown, Wildcats quarterback Clay Millen quickly connected two passes downfield to Woodinville’s 27 yard line, creating two final shots at the end zone, but to no avail. The first was well covered and fell incomplete in the right corner of the end zone, and the second Millen was chased around in the backfield before being sacked. Here are five takeaways:

Clay Millen saw a lot of pressure last week against Skyview, yet somehow, the 6-foot-3 junior quarterback was able to escape from a lot of it.

That was not the case this week, when Woodinville, which played like one of the state’s most complete defenses, brought pressure early and often to the dynamic quarterback.

The pocket collapsed on Millen throughout the night, as he took sack after sack, including on the final play of the game as he was trying to get a last-ditch deep ball into the endzone.

“They had us covered,” Mount Si coach Charlie Kinnune said. “We saw plenty of film and they had us covered up. I think Clay had a great game. Really, really proud of him for how competitive he is, what a team guy he is.”

On a night where offensive production was mostly nowhere to be seen, Woodinville kicked into a different gear on its final drive.

As the team marched 60 yards in 2:17 minutes to score the game-winning touchdown at the lead of its offensive line, Levi Rogers went into full tunnel vision.

Rogers, the Falcons’ left guard who holds offers from 10 schools in the Pac 12, said the raucous crowd noise were drowned out by the moment.

“I can’t hear anything” on the final drive, Rogers said. “I’m so focused on one thing. Everything kind of drowns out. I’m focused on what’s ahead.”

Johnson was the lead rusher as the Falcons took to the ground on their game-winning drive.

Woodinville head coach Wayne Maxwell credited his offensive line for their ability to stick to form and create gaps for a steady run game.

Credit to Mount Si for keeping Cage Schenck from breaking loose throughout the many times the three-way playmaker.

Getting the ball to Schenck, a first team all-KingCo Crown selection at receiver, corner and special teams as a junior, was a priority for Woodinville throughout the contest. And despite a pair of punt returns where Schenck made multiple defenders miss and seemed to be one block away from breaking loose, he couldn’t break through.

“That was a real gritty win,” Schenck said.

No, Mount Si and Woodinville don’t have a storied, decades-old tradition befitting of the classic rivalry label.

But the matchups of late have had all the DNA of one.

Mount Si beat Woodinville 27-17 last year when the two teams met during the regular season. But the Falcons came out on top when the teams faced off in the KingCo Crossover, 16-14. Both teams made deep postseason runs. Mount Si lost to Puyallup in the 4A state quarterfinals and Woodinville made the 4A state semis, where it lost to Lake Stevens.

Maxwell called it a “respectful rivalry.”

Saturday night may not be the last time the teams see each other this season.

Last week, a recovered onside kick to start the second half gave Mount Si momentum that propelled it to victory.

This week, head coach Charlie Kinnune took another big swing, in a much more consequential situation, and it failed. The Wildcats faced fourth and seven inside the Woodinville 40-yard line. A first down would have put them in the driver’s seat to win the game.

So the team lined up to punt, but Kinnune called a fake. The pass fell incomplete, setting up Woodinville’s game-winning 60-yard drive. Kinnune expressed remorse.

“We were kind of in no-man’s land,” Kinnune said. “Could shoulda woulda. Fake punt doesn’t work and you’re the goat.”

But the head coach was optimistic about his team’s reaction to the close loss, particularly their 246 yards of offense against a solid defensive team. In the huddle after the game, the players were cheering and chanting — a level of “ra ra” he had not seen in many groups before.