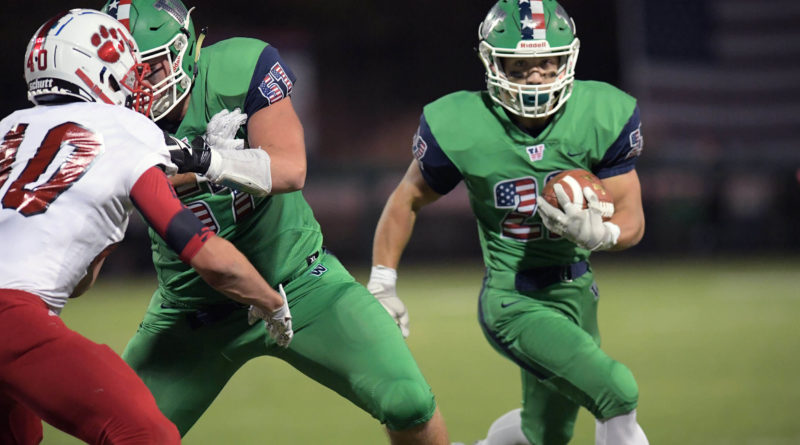 Here’s a look at how Scorebook Live’s Top 25 Washington high school football teams fared in games played Sept. 26-28. These are our all-classification rankings.

After easily handling Rainier Beach, the Crusaders get Garfield next week.

The No. 1 team in 4A put up 70-plus points for the second consecutive week.

Joey Johnson punched in a one-yard touchdown run with 27 seconds left to lift Woodinville over Mount Si in a slugfest Saturday night.

Quarterback Nathan Thomas tossed a pair of touchdown passes, and the Eagles finished off the final 10 minutes with two run-only scoring drives in turning away No. 6 Puyallup.

Sam Huard threw for 405 yards and five touchdown passes, all to Junior Alexander, and the Lancers walloped Tahoma, 48-0, at Highline District Stadium.

The Riverhawks were stopped inside Union’s 10 yard line twice, including late in the third quarter on fourth and two from the four yard line.

The Vikings had just 40 second-half yards against the Eagles. “They did a great job of filling the inside gaps and taking away our zone play,” Puyallup coach Gary Jeffers said.

Asian Fraser had two carries for 161 yards and two TDs as the Lancers rolled. Lakes has outscored its three opponents 183-29.

The Papermakers dominated up front, opening holes for Jacques Badolato-Birdsell to run wild again (26 carries, 137 yards and a TD).

RB Kannon Katzer went crazy again, rushing for 284 yards and four TDs on 30 carries. But he was tackled just short of the goal line as time ran out:

QB Cody Whalen threw two touchdown passes and ran for another as the T-Birds handled a school with twice the enrollment.

Landon Rehkow booted a 21-yard field goal at the horn to keep the Bears undefeated. Watch the kick:

With the loss, Bellevue is 2-2 entering league play for the first time since 2009.

The pocket collapsed on Clay Millen all night, but he battled to give Mount Si a chance. “They had us covered,” Mount Si coach Charlie Kinnune said. “We saw plenty of film and they had us covered up. I think Clay had a great game. Really, really proud of him for how competitive he is, what a team guy he is.”

It was the Wildcats’ second straight loss to Lynden, who came back from 11 down in the fourth quarter to win 24-21 last season.

Rainy, muddy conditions didn’t stop the Hawks from putting up 50-plus points for the second consecutive week.

QB Grady Robison had three touchdown passes and one TD run as the Wolves won their third straight game. Next week: Mount Si.

QB Yaro Duvalko barely played in the second half and still threw for 148 yards and three touchdowns. Skyview opens league play next week against Battle Ground.

Cougars rebound from tough loss to O’Dea with blowout of North Creek.

Turnovers killed the Eagles as they crashed back to earth with a 20-point road loss.

The battle-tested Bulldogs outscored Prep 21-0 in the second half. Now they get Eastside Catholic.