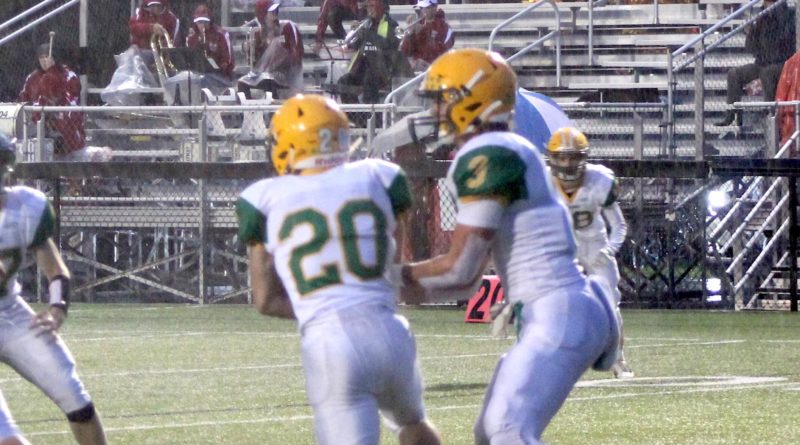 A 23 minute lightning delay to Friday’s battle between Northwest Conference frontrunners No. 2 Archbishop Murphy and No. 6 Lynden had both teams with cold feet offensively.

The Lions did just enough to break through in a 10-7 victory and take a stronghold on the conference title race.

Marko Samoukovic drilled a 26 yard field goal with 7:52 remaining in the fourth quarter, and the Lynden (3-1, 1-0) defense held strong, forcing a fumble on Archbishop Murphy’s final drive to seal the victory.

“For us, we just focus on what we can control, and it sets the standard,” Lynden head coach Blake VanDalen said. “ … I feel like we raised the bar. I know the score wasn’t as exciting as last week, but that was a hell of a battle out there. That was a respectful win.”

It was the second straight victory over Archbishop Murphy for Lynden, who came back from 11 down in the fourth to win 24-21 last season.

Here are five takeaways from the Archbishop Murphy-Lynden game:

Offense was all the talk after Lynden ran for 455 yards in a 56-47 victory over then No. 2 Steilacoom last week, but their defense stifled the Archbishop Murphy (3-1, 0-1) offense all night Friday.

The Lions didn’t allow the Wildcats to cross midfield in the first half, and sealed the victory by recovering a fumble after a bobbled snap on Archbishop Murphy’s final drive.

Ayres rotated series with Brock Heppner until Heppner left the game with an injured knee with seven minutes remaining in the third. Ayres commanded the offense well all night, scoring the game’s only touchdown on a 1-yard sneak to cap a four play, 62-yard drive.

With the Lions facing third and 11 with 2:44 remaining in the fourth, Ayres gained 10 yards on a quarterback draw to set up fourth and 1, where gained six yards to move the chains before kneeling out the clock.

“One of the reasons we go with two quarterbacks is so if [injury] happens, we don’t skip a beat,” VanDalen said. “We can drive right down and win a game.”

Heppner, who also plays wide receiver and long snapper, should be back sharing snaps at quarterback when the Lions take on Lakewood next week.

Steven DiLorenzo is one of the state’s best running backs

DiLorenzo ran for a school record 320 yards in last week’s shootout victory against Steilacoom, but had to earn all 119 of his yards on 20 carries Friday against a stout Archbishop Murphy defense.

“We knew after last week, and what we saw on film with their d-line, that it was going to be a different story,” VanDalen said. “He’s still a grinder. He’s still going to work hard, but we had to be a little more creative and find a way.”

On Lynden’s touchdown drive, DiLorenzo ripped of three straight runs of 27, 10, and 23 yards to set up Ayres’ one-yard touchdown.

The Wildcats are no joke on defense

Archbishop Murphy entered the night giving up just 11.3 points per game and proved why against a high powered Lynden offense. The Lions entered Friday averaging 34.33 points per game.

“I thought the defense played outstanding,” Archbishop Murphy head coach Mark Leone said. “I thought they rallied to the ball. Outside of a couple drives and a couple big plays, I thought we held them pretty well.”

The Wildcats may no longer control their own destiny in the Northwest Conference, but their defense will still make them a major contender when the playoffs begin.

“I think you have to understand that it’s one game,” Leone said. “It’s still week four, and we have a long season left to get better. And that’s what we have to do.”

And their offense will continue to improve with three-year starter Victor Gabalis at quarterback. Gabalis scored the Wildcats’ lone touchdown Friday, running it in from 11 yards out to cap a five play, 42-yard drive on Archbishop Murphy’s opening possession of the second half.

Archbishop Murphy and Lynden have combined for seven of the past 13 2A titles, with the Lions winning six and the Wildcats taking the crown in 2016.