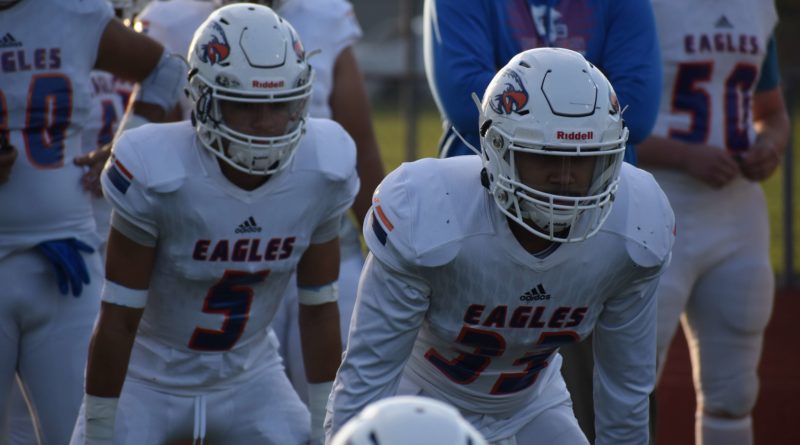 If you are waiting for third-ranked Graham-Kapowsin High School to spring a leak, you might be waiting a while.

In fact, the Eagles are proving to be more robust as the season shifts closer to the midway point.

Quarterback Nathan Thomas tossed a pair of touchdown passes, and the Eagles finished off the final 10 minutes with two run-only scoring drives in turning away No. 6 Puyallup, 27-13, on Friday night at Sparks Stadium.

And Graham-Kapowsin’s defense was fantastic, holding the high-charged Vikings to no points and just 135 total yards.

Here are five takeaways from the Graham-Kapowsin-Puyallup game:

Good idea, Graham-Kapowsin, to get your best player involved in the second half

There won’t be many times this season when senior wide receiver Malaki Roberson gets shut out for a half.

But at halftime, Roberson had zero catches – and little impact on the game.

That changed quickly in the second half as the shifty playmaker caught five passes for 72 yards – including a 38-yarder that set up the Eagles’ go-ahead score midway through the third quarter.

“Malaki is the first guy to be hard on himself, and he blew a couple of routes in the first half,” Eagles coach Eric Kurle said. “We found a way to get him the ball. He is electrifying.”

If there is a vulnerability in the Eagles’ secondary, we are still searching for it

It has been a while since the high-powered Puyallup passing attack was bottled up like this.

But the Eagles were all over Vikings quarterback Luke Holcomb and the receiving corps. Holcomb finished completing 10 of 19 passes for 100 yards, and throwing a critical fourth-quarter interception. He was sacked five times, all in the second half.

With the Vikings trailing 20-13 with less than four minutes remaining, Holcomb threw down the field on third down – and was picked off by Graham-Kapowsin’s Billy Phinizy just past midfield.

Pound the middle of a defense – until it breaks

Puyallup’s front seven is stout, led by all-state linebacker Danny Uluilakepa, who makes a habit of swallowing up opposing tailbacks.

And for three quarters, the Vikings did a pretty good job on keeping Graham-Kapowsin’s power rushing game from getting untracked.

But the fourth quarter was a different story. Led by Shabro Johnson, Michael Kelley Jr. and Jonas Waugh, the Eagles rushed for 109 yards on 14 carries, scoring a pair of decisive touchdowns – a 9-yard scamper by Waugh and a 3-yard plunge by Johnson.

“That makes a difference in high school football,” Kurle said. “When you win the physical side inside the box, you are going to win the most games.”

On the biggest night of the season, Puyallup’s offense went nowhere

The Vikings might wake up sore Saturday, in body and mind

They were eaten up at the line of scrimmage, totaling 135 yards on 43 plays (3.1-yard-per-play average).

Puyallup has shown to be a second-half team this season, but even that never materialized Friday. The Vikings had just 40 second-half yards.

“They did a great job of filling the inside gaps and taking away our zone play … and messing with our (run-pass option) game a little bit,” Puyallup coach Gary Jeffers said. “We were having a hard time seeing the field. We just ran out of bullets.”

Ah, the power of long-term memory figured into Graham-Kapowsin’s motivation

Two years ago, Graham-Kapowsin blew a big lead, and lost to the Vikings at Sparks Stadium.

Last season, the Eagles made a valiant late-game charge, but ended up losing to their 4A SPSL rivals in overtime in Spanaway.

On Friday night, the Eagles made sure there would be no last-second drama, controlling the clock after taking the lead for good in the second half.