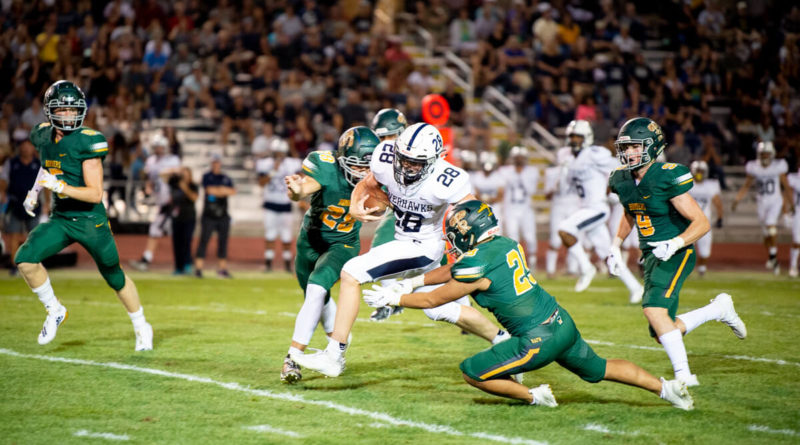 Game nugget: Garfield beat Prep in a 42-28 shootout last season and has won the matchup each of the last two seasons.

About the Bulldogs: Don’t let the record deceive you. Garfield has challenged itself in the first three weeks of the season, and is coming off of two barnburning losses in weeks two and three. It dispensed of Interlake in week one, 53-6, then lost in a back-and-forth comeback, fall-behind 40-39 loss at top-10 4A team Central Valley in Spokane. In its narrow loss to Bellevue last week, after Bulldogs QB Javon Tade ran for a touchdown with seven seconds left to make it a one-point game, a failed two-point conversion sunk the Bulldogs. Running back Avery Morrow, a Nevada commit, is one of the state’s best.

About the Panthers: The Panthers have taken care of business and sit at 3-0 ahead of perhaps its toughest challenge yet in Garfield. Prep’s defense has held firm in lopsided wins over Battle Ground and Roosevelt, and beat Redmond 24-17 in week two. Quarterback Jake Sype has been a rock under center. He completed nine of 11 passes for 241 yards and four touchdowns in week one. Rishi Daniels is a returning all-league selection at receiver and safety, and is perhaps Sype’s most dangerous target.

Game nugget: Battle of the Bell is an annual rivalry game at shared home site Joe Albi Stadium between the two Mead School District high schools. This year has as much flare as year’s past. Mt. Spokane running back Kannon Katzer spent his freshman and sophomore years at Mead before transferring.

About the Wildcats: Last year, quarterback Jeter Schuerman was called up from JV after a series of injuries. And in his first varsity start, Schuerman delivered, helping Mt. Spokane upend rival Mead 13-10. Where last year was marred by injuries and untimely losses at times, Mt. Spokane is off to a blazing start: it is 3-0 with two out-of-state wins and a home win over Moses Lake. Schuerman is running the show now under center, and running back/slot receiver Kannon Katzer is amid a record-breaking start to the season. The senior has 823 yards and 13 touchdowns through three games, including a program-best 355 rushing yards in a week three win over Sandpoint (Idaho).

About the Panthers: The Panthers opened the season with two Idaho teams and split the first two weeks 1-1. After beating Post Falls 42-21, Mead lost to Coeur d’Alene, a perennial Idaho power, 42-28. Last week, it beat Lewis and Clark 34-10 in its Greater Spokane League opener. Quarterback Ryan Blair, an honorable mention all-league selection as a junior, leads the way for the Panthers. The 6-foot, 180-pound dual threat QB set the completion percentage record (72.0) last season as he racked up 2,098 yards and 29 TDs in the air. And he’s off to a strong start this season. He tossed for three touchdowns in Mead’s win over LC in week three. Ben Voigtlaender was the league defensive MVP last season, and should cause problems for Mt. Spokane’s O-line and quarterback Jeter Schuerman.

About the Riverhawks: Chiawana lost to Bothell 41-14 in the first round of the state playoffs last season and return 15 starters from that team. The Riverhawks were hit with news that standout receiver/defensive back Kobe Singleton, a 2B two-way first team all-state selection at Tri-City Prep last year, would miss the season with an ACL tear last week. But they still boast one of the state’s most imposing defenses. That’s led by linebackers Riley Cissne and Roy Colvin. On offense, Caleb Alverez, Preston Vine and Dion Lee are the top targets for standout quarterback J.P. Zamora. And they’ve been imposing so far, including in a 38-7 blowout win over Richland for a week one league title matchup, and a 37-0 blanking of a solid Kennewick side.

About the Titans: The defending 4A state champ Titans are coming off their first loss in 17 games. And their week three result, 31-8 at the hands of Eastlake, was a drubbing. Eastlake led 7-0 at half and according to The Columbian, led 24-0 in the fourth quarter. The result was a departure from Union of past — even the past week. The Titans walloped top 2A side Steilacoom 41-13 on the road in week two. Isaiah Jones has broken out as one of the state’s top running backs. Dual-threat transfer quarterback Caleb Jordan has 6-foot-4 speedster in sophomore Tobias Merriweather out wide. And the defense is shored up by Tyler Summers, Aiden Hoyt in the secondary and Logan Wilson at linebacker. Facing top-5 4A team Chiawana at home should show us what the Titans are really made of.

Game nugget: What was a shootout between top-tier 4A programs last year shapes up to be that once again. Puyallup got the edge in 2018, 41-34, before advancing the 4A state semifinals. The Vikings were G-K’s only regular season loss. Both teams have beat Emerald Ridge and Bellarmine Prep this season.
About the Eagles: Nate Thomas stepped under center in place of four-year starter and current Washington Husky Dylan Morris, and the senior has the G-K offense humming. It helps to have three-star playmaker Malaki Roberson and Eython Daughtery as targets out wide, along with big-bodied Michael Kelley, a 6-2, 235-pound running back. The Eagles started the season with a win over perennial Oregon powerhouse Sheldon, then bested Bellarmine Prep and Emerald Ridge in the ensuing weeks.

About the Vikings: The Vikings are off to a strong start after returning nine starters from its state semifinal caliber team last season. Quarterback Luke Holcomb replaces his older brother, Jacob Holcomb and has shown impressive flashes, particularly his two touchdowns and 287 yards in a 29-12 win over Sumner Friday, opposite two interceptions. Danny Uluilakepa controls the defense from the linebacking corps, and had 182 tackles last season, alongside tight end and linebacker Isaac Clark.

Game nugget: The 2A Northwest Conference League title is here, and September’s not even over.

About the Lions: How do you respond from losing a season-opener to a competitive 1A team, after making the state championship game the year before? Ask Lynden, winners of its last two, including an instant classic shootout win over Steilacoom on Friday, 56-47. Brock Heppner can run, pass and catch — oh, and play defensive line. The senior standout caught the game-winning touchdown on 4th and 14 late against Steilacoom. He’s a big reason why the Lions made the 2A state title game last year. But the standout stat of the season thus far goes to Steven DiLorenzo. The senior running back broke the program’s rushing yards record in a single game with 320 yards off of 25 carries.

About the Wildcats: The hottest team in 2A, hands down. The second ranked Wildcats hold arguably the most impressive win of the season across all classifications: a 27-21 win over two-time defending 2A state champion Hockinson on the road, snapping a state-best 28-game win streak. Victor Gabalis is a third-year starter and may be good a dual-threat quarterback as there is in the state. That gives interim coach Mark Leone composure and leadership under center. The Wildcats didn’t make it out of the district round last year. This year has a wholly different feel, now that Murphy is a state title contender again.