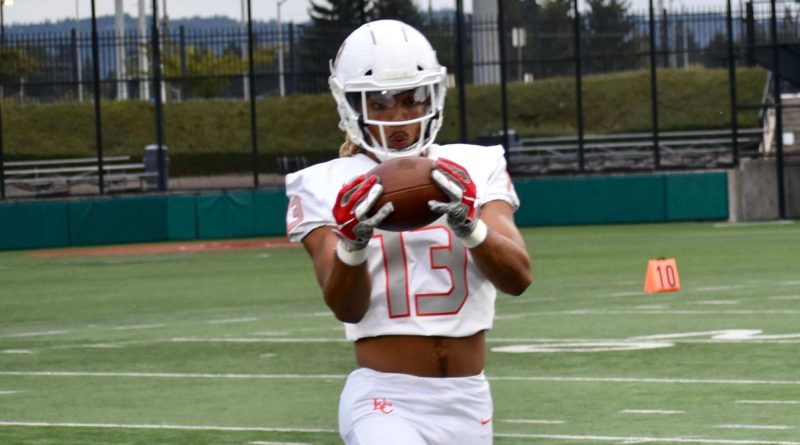 On the heels of our Top 100, where we listed the best high school football players in Washington, we’re now bringing you position-by-position player rankings.

These are early-season rankings based primarily on last year’s performance and spring and summer observations.

Washington is loaded with wide receiving talent, giving us our most expansive position list yet. Here’s a look at the Top 30 wide receivers in Washington, as compiled by Scorebook Live Washington reporters Andy Buhler and Todd Milles.

Terrific athlete who can play all over the field. Reigning Columbia Basin/Big Nine defensive MVP.

One of the fastest burners in state, he doesn’t just rely on speed – he runs crisp routes.

Speedy playmaker on both sides of the ball. Great size, top athlete in the 3A Greater St. Helens League.

Can do things athletically on the perimeter others only dream of.

Sheley is a big reason the Bears are off to a fast start in 2019.

The tall wideout has grown since his junior season, and is the top target in the Papermakers’ pass-heavy offense.

Fewel is already having a big 2019, including 14 receptions for 165 yards and two touchdowns in Week 3. He holds an offer from Idaho.

Roberson was one of the top wide receivers in the 4A SPSL last season (63 catches, 895 yards, eight touchdowns), and already has a highlight-reel TD catch in 2019.

First team all-league selection at receiver and safety as a junior. Holds an offer from Idaho.

With Phillip Riley gone, he becomes clear primary outside target in explosive offense.

The Hawks’ top player on both sides of the ball. Had 20 touchdowns and 1,018 yards receiving last year, according to The Columbian.

One of the best cornerbacks in the state, Campbell is a constant big-play threat on offense.

His coach, and ex-WSU wideout, thinks this Eastern Washington commit is best route-runner in state.

Tall, fast receiver played in the state championship game as a freshman. Holds offers from Utah, Colorado and Nevada.

Only a sophomore, the son of former UW football player Nick Bogan might be next great player from Tacoma.

Tough matchup on the outside. Committed to Arizona.

Will play for Justin Wilcox at Cal next season.

Another one of Sam Huard’s loaded stable of receivers. Has six offers, including USC and Nebraska.

Has 18 offers, including Michigan, Florida and Penn State.

Kinchen is one of the best DBs in the state, and a clutch wide receiver. He has eight offers, including Cal and Oregon.

Alexander already has offers from Utah, Arizona, Cal and several others.

Rated the No. 1 athlete in the class of 2021 by 247Sports. Holds offers from Alabama, Clemson, Ohio State and many more.

The Ohio State Buckeyes are getting a special player. Just three games into his senior season he has 29 receptions for 512 yards and seven touchdowns.