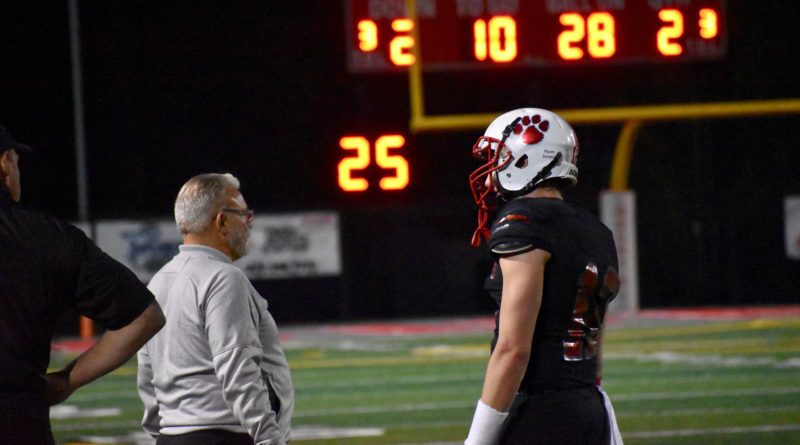 SNOQUALMIE — Mount Si has built a reputation around its oft-potent offense, and for much of the first half on Friday night, it was nowhere to be found.

But late in the second quarter, the Wildcats flipped the switch, scoring 21 unanswered points en route to a 31-26 win over nonleague 4A opponent Skyview at Mount Si High School.

Clay Millen threw three touchdown passes for the Wildcats, while Skyview quarterback Yaro Duvalko ran one in, tossed for another and Jalynnee McGee scored twice on the ground.

A lot can be gleaned from the showdown between two 4A teams hovering around the top-10. Here are five takeaways:

The next Millen in line is ready for the spotlight

While Cale Millen shined under center as one of the best play callers in the state for the Wildcats last year, his little brother — two years his junior — was waiting in the wings as his backup.

His name is Clay Millen, and he played with the poise of a multi-year starter.

Millen, a 6-foot-3 junior, tossed for three touchdowns, evaded pressure and executed how-did-he-do-that effort plays throughout the game, a year after his older brother slung the ball around for seven touchdowns against the same Skyview side.

There’s a reason Millen sported an offer from Oregon before making a single varsity start.

Kinnune said Millen, son of former University of Washington great Hugh Millen, who is now a coordinator with the Wildcats, has “carte blanche” with the offense and calls audibles at the line of scrimmage “30 to 40 percent of the time.”

Millen feels plenty comfortable running the show in his third start for the Wildcats.

A single play call may have changed the game

As much as individual playmaking and sound execution were factors, a single play call may have altered the game altogether.

After scoring twice in the final three and a half minutes of the second quarter to take a 41-6 lead into half, Mount Si called and recovered an onside kick on the first play of the third quarter. The play, which was jumped on by the kicker Colby Ramsey, was brought up by Mount Si’s special teams coordinator going into halftime.

Kinnune was tasked with the final say. And he decided to go for it.

“You’ve got to do stuff like that to win games like this,” Kinnune said. “And we did, it worked and we went down and scored. That put us up 21-6 and without that we don’t win this game.

“Football’s so emotional. Those are the kind of things that tilt the field in your favor. I think that was a key play to win the game.”

But Kinnune admittedly hesitated on the call. If Skyview would have recovered, the Storm would have been in favorable field position to tie the game. Instead Mount Si recovered and scored within three minutes — a 10-yard pass from Millen to Zach Soliday.

“The kids executed, which is all that matters,” Kinnune said.

Midway through the second quarter, Duvalko rolled to the right, took off on his feet and after he was tackled, stayed down grimacing and tapping his left shoulder. His non-throwing shoulder had separated, and the Storm’s trainer helped him pop it back in.

Duvalko’s came in a series later, played the rest of the game and helped lead a furious fourth quarter comeback.

Mount Si held leads of 18 and 19 points, including a 31-12 lead early in the fourth quarter. The Storm’s offense had been sputtering, but it wasn’t done.

Gavin Baskette took a near-50-yard reception inside the five-yard line to set up a touchdown run by McGee. Baskette had a diving catch in the corner of the endzone to secure the two-point conversion, and minutes later, caught a 26-yard touchdown pass from Duvalko to cut the deficit to five with 5:30 left in the fourth quarter.

“Those last couple drives, those are clockwork. That’s what we strive for. That’s how efficient our offense should be when it’s humming,” Duvalko said.

Final drive says a lot about this Mount Si team

Mount Si got the ball back deep in its own territory with just over five minutes to play. Skyview had timeouts, but the Wildcats bled out the clock thanks to two heavy-pressure conversions from Millen.

For the Wildcats, the final drive was an exercise in effective game management, particularly at a moment in the game when Skyview had momentum with a two-touchdown fourth quarter.

“That’s a darn good team,” Kinnune said. “They’re going to win most of their games. For us to close it with a four minute offense and run it out, that’s a big time. That’s a confidence builder for our coaching staff.”