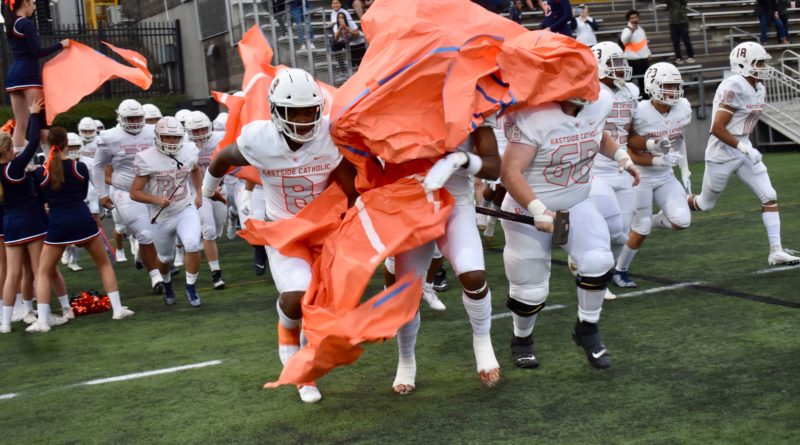 As the Eastside Catholic football program, winners of three of the last five 3A state championships, has continued to build on its success in recent years, the program has also aimed to be relevant on a national scale.

“(Eastside head coach Dominic Daste) has goals of having a nationally recognized team,” athletic director Stacey Stoutt said. “We’ve accomplished that in some regard, playing teams out of state gives some more momentum in that goal.”

In its weekly Super 25 regional rankings, USA Today ranked Eastside Catholic fifth in the west (12 states) this week. MaxPreps slotted it as the 13th ranked team in the country in the preseason.

Much of that has to do with the Crusaders not just succeeding in Washington, but also its success on a national stage.

The Crusaders prepare to host Pinnacle (Ariz.), in what will be its third out-of-state nonleague game of the season and seventh in the last two years. They beat Grant Union (Calif.) in week one at home and Central Catholic (Ore.) on the road in week two, the latter being the second game in a two-year deal.

“Our program philosophy is we’d like to go on an away game once a year,” Daste said. “We want to play really good talent and we have a lot of that in state, but just to take our guys on a trip by ourselves is, I think, fun.”

Stoutt also said the school has had a challenging time finding nonleague games in-state, citing timing and availability, as well as a desire to find good competition — whether its in-state or out of state.

And it has found plenty of out-of-state challengers.

Over the years, the program has been invited to high school bowl series’ such as the Burger King Bowl in Boca Raton, Fla. in 2014 (a loss to Jacksonville Trinity Christian of Florida), the Geico Bowl Series in Arizona (2014 and 2018) and the Honor Bowl in San Diego, Calif (2018).

Daste, who was hired in the offseason after Jeremy Thielbahr stepped down, said he wasn’t focused on whether the number of out-of-state games reflects the program’s pedigree.

“Yeah, I don’t know,” Daste said Friday. “I’ve been the head coach for all of six months, I don’t know if we’ve established anything. We want to play really good talent. Some people reached out to us wanting to play us, so we took the opportunity.”

Zetterberg, who was 1A Nisqually League MVP last season, tallied a school record 442 all-purpose yards, 309 receiving yards (also a school record) and four total touchdowns in a 33-30 win over Eatonville on Friday.

He also had an interception and 10 tackles on the defensive side.

Cascade Christian coach Devin Snyder said that while all players are likely trying to break records in the back of their minds, Zetterberg stands out for his selflessness.

The week before it was his cousin, Isaiah Zetterberg, who had the big game. In just four minutes of football before the game was called for lightning, Isaiah Zetterberg had more than 100 yards receiving and two touchdowns.

Then Eatonville put its best corner on Isaiah — and Connor Zetterberg took advantage.

The 6-foot-3, 187-pound senior has flown under the radar in recruiting, to his coach’s surprise.

“He has a 37-inch vertical leap,” Snyder said. “He’s everything you’re looking for in a kid. Just plays at a small school.”