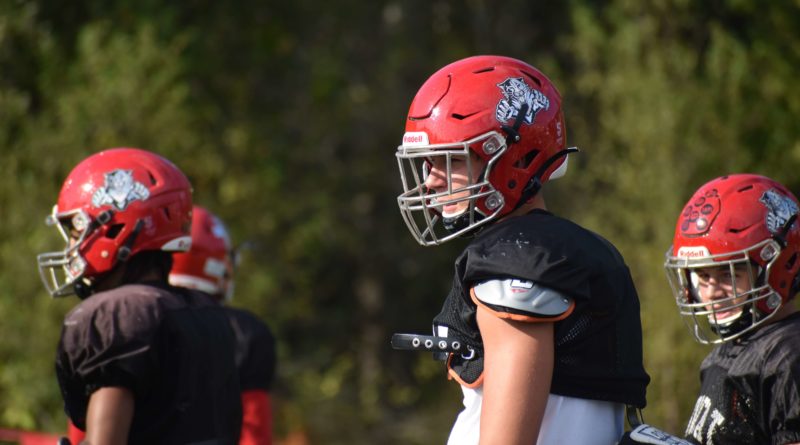 MILL CREEK — There wasn’t much to complain about Wednesday at Archbishop Murphy football practice.

The sun was out. Coaches were smiling. Players were kidding with one another, eventually breaking out in chorus when the cheerleaders blasted, “Sweet Caroline” for a dance routine on the west side of the field.

That is what transpires when you seamlessly transition from one coach (Jerry Jensen) to the next one (Mark Leone).

That is what happens when you lose seven transferring teammates to other schools, and the guys behind them allow you to not miss a beat.

That is the feeling when, after all of that, you go down and upend two-time defending Class 2A state champion Hockinson (27-21) in a matchup few gave you a chance to win. As a result, the Hawks saw their 28-game winning streak come to an end.

“It feels good,” said Victor Gabalis, ATM’s third-year starting quarterback. “With all that adversity we went through … and all of that frustration we’ve had over the years with things not going our way – it is coming out this year.”

*In 2016, the Wildcats received national media attention after teams in their league announced they would rather forfeit games than risk injury playing a loaded ATM squad with college-ready linemen.

*Two years ago, the heavily-favored Wildcats were unexpectedly ousted in the 2A semifinals by Tumwater, 10-6, in a game in which they gained just 66 total yards.

*And last season, ATM was walloped at home in a televised non-conference game against Hockinson – then finished up a disappointing campaign by losing to Sehome in the 2A district round.

In May, Jensen, a former linebacker at the University of Washington, stepped down after six seasons, and was replaced by Leone, the offensive coordinator, on an interim basis. Leone, a 2006 ATM graduate, played for the late legendary coach Terry Ennis.

The movement did not stop there: Seven players left the team, including a pair of starting linemen.

Leone pointed to the senior leadership of Gabalis and defensive end Zion Evans-Robinson as key in keeping the returning group focused on the upcoming season.

“Chin up,” said Evans-Robinson, when asked how he dealt with all the defections. “Some of those guys who left were my cousins. I wasn’t mad – they do them, and I do me.”

Robinson is clearly the refreshing, energizing on-field leader who talks up teammates.

“The guys love it when I am out front and getting them riled up for practice,” Evans-Robinson said. “And game day is a whole different energy.”

And certainly Gabalis was responsible Friday night for the team’s biggest play this season – a 69-yard touchdown run – that deflated the Hawks in ATM’s 27-21 win.

“We’ve just got to keep working, and keep our purpose,” Gabalis said. “When we lose that, that is when it can go downhill.”

Leone was part of two state championship squads as a player, and was an assistant coach on the 2016 team (oddly enough, his first coaching job was at Hockinson under Rick Steele in 2006-07).

He has tweaked the offense, going back to more of a true Wing-T attack. And on defense, the Wildcats are taking more chances with pressure.

“We are trying to create culture of high energy, fun and discipline,” Leone said. “You can be a hard worker but enjoy what you do.”