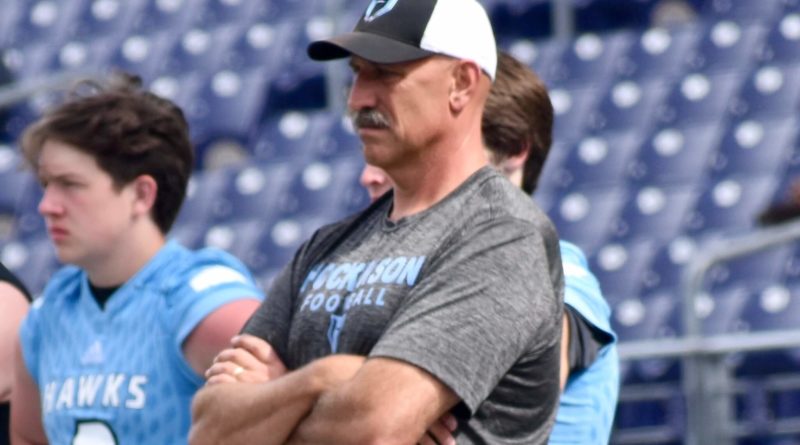 Hockinson High School’s Rick Steele must have thought a haze rolled in as his Hawks saw their state-best 28-game winning streak snapped.

And yet, after the sun rose Saturday morning, both coaches — neither of whom got much sleep the night before — admitted the loss of those streaks impacted players the same way.

Hockinson is motivated to get back to winning games.

“They are rearing to go,” Steele said.

“They have a taste of it,” Ericson said. “And they are going after it again.”

If the Sawyer Racanelli-less Hawks were going to lose a game this season, many figured it would come in November in the Class 2A state playoffs — not in Week 2 of the regular season.

But Archbishop Murphy shocked the Hawks on their home field, 27-21.

In film review Saturday morning, Steele sat with his players and counted 32 “critical errors” Hockinson made in the game.

“We held the ball five times in the red zone, and did not score,” Steele said. “Archbishop Murphy is too good of a team to have that many (errors).”

In a team huddle Monday at practice, Steele asked his players how they slept Friday night. All of them answered the same way: Not good at all.

“All the kids said that the loss caught their attention,” Steele said. “I mean, the core group had never lost a football game. I guess they feel mortal now. … But they are gritting their teeth. I feel bad for R.A. Long (Hockinson’s next opponent) this week.”

Long losing streaks are nothing new to Ericson. He was the new coach at Klahowya Secondary School when the Eagles snapped their 24-game skid in 2011.

That is not to say Ericson did not feel the heavy weight of the Wolves’ current losing streak around Port Orchard. The entire community did.

“It was an eye sore for everybody,” Ericson said.

Not to mention, Friday was a special night in town as former coach Ed Fisher returned to see the field renamed in his honor (Ed Fisher Field at Kitsap Bank Stadium).

The Wolves overcame an early deficit to wallop Rogers of Puyallup, 31-14.

“You know, I was the stranger standing in front of them a few months ago, asking them to trust me — even though I was their third head coach in four years,” Ericson said. “Those seniors have been through a lot … so it was pure emotion.”

In class Monday, all that the students wanted to talk about was the win Friday. Players were still coming up to their new coach, giving him high-fives and handshakes.

“It’s a mixture of relief and excitement,” Ericson said. “And it had a little bit of Hollywood in it, too, with Coach Fisher being there.”