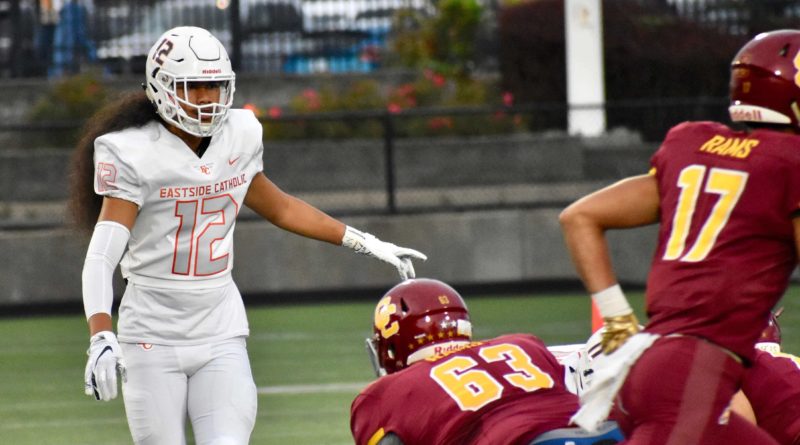 Here’s a look at how Scorebook Live’s Top 25 Washington high school football teams fared in games played Sept. 12-14. These are our all-classification rankings.

It’s no secret Eastside Catholic is the most talented team in the state of Washington. But are the Crusaders also the best team in the Pacific Northwest? Perhaps Friday’s convincing win over the Rams gave an answer.

Surviving three turnovers, and turning away more than a few promising Lincoln drives, Lake Stevens held off the Abes at Lincoln Bowl in Tacoma.

In one of the best games of the weekend, Woodinville rallied from a 20-7 fourth-quarter deficit to edge Monroe. Woodinville RB Joey Johnson had a monster game: 28 rushes, 252 yards and a TD.

O’Dea rallied from a 14-7 halftime deficit to beat Bethel on the road.

It took two days, but Graham-Kapowsin eventually rallied for a lightning-delayed win over Bellarmine Prep. Eagles’ QB Nate Thomas threw two TD passes in the final 2:30 to secure the victory.

After forcing eight turnovers in a shutout of Kennewick the Riverhawks’ defense is looking like one of the best units in the state.

In perhaps the biggest upset of the weekend, Archbishop Murphy went into Hockinson and snapped the Hawks’ 28-game win streak. Wildcats QB Victor Gabalis had two rushing TDs in the victory.

The Vikings have outscored their first two opponents by a combined score of 70-3. It will get tougher in Week 3 as they visit Sumner.

Lakes’ Week 2 game at Central Kitsap was canceled due to the threat of violence.

The Papermakers poured it on in a rout of Hazen. Senior WR/CB Tyler Forner had two punt return TDs.

After a 24-14 loss to Camas a week ago – then this loss to the reigning Class 4A state runner-up – Lincoln coach Masaki Matsumoto remains upbeat about his squad. “I’ve told our players, I feel really good about our team,” Matsumoto said. “It is going to be up to us coaches and players to respond.”

Five-star athlete Emeka Egbuka scored two touchdowns in the second half to put the Sentinels on the board. But it was all Union in another lightning-delayed game.

In yet another lightning-delayed game Dylan Paine rushed for 166 yards and five touchdowns as Tumwater scored 50+ for the second straight week.

Christian Galvan, Bothell’s all-4A KingCo running back, was bottled up on Saturday, finishing with 77 yards on 15 carries. The Cougars were held to 86 yards total on 32 rushing attempts.

Matt Gabbert threw four touchdown passes in the final 12 minutes of the game — two to Cameron Sheley — to lead Central Valley to a come-from-way-behind 40-39 victory on Saturday.

The Wolverines rebounded from a season-opening loss with a dominant defensive performance.

The Storm had no trouble with Columbia River. Now they get a road date with Mount Si.

The Bearcats had a 13-point lead heading into the fourth quarter, but couldn’t hold off Woodinville. RB Blake Rybar had another big game with 203 yards and two TDs on the ground.

The Wolves had no trouble with Lake Washington. Now comes the showdown with Union.