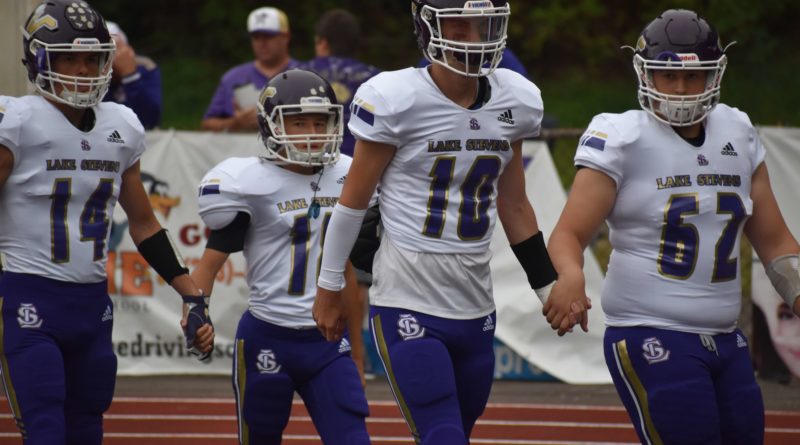 But his top-ranked Lake Stevens High School Vikings were perfectly responsive to the adversity.

Surviving three turnovers, and turning away more than a few promising Lincoln drives, Lake Stevens held off the No. 4 Abes, 35-26, at Lincoln Bowl in Tacoma.

Running back Dallas Landeros rushed for a game-high 146 yards on 22 carries. His 29-yard touchdown run, the last of his three scores, gave the Vikings a 35-20 lead with 4:32 remaining.

Experience is football’s most valuable currency

Tri could have easily become unglued after fly-sweep runner Sergio Pelayo collided with Landeros as quarterback Tanner Jellison was about to hand the football off, causing a fumble – and third Vikings’ turnover late in the third quarter.

It gave the Abes – trailing 21-20 – a golden opportunity to take a lead heading to the fourth quarter. Instead, the Lake Stevens defense held near midfield – and gave its offense another chance to regain control of the ballgame.

“We’ve got some (big-game) experience and were able to overcome some adversity,” Tri said. “(The Abes) were real physical and fast, but our guys played with a lot of heart and emotion.”

Once again, Kasen Kinchen showed big-play moxie at the most important time

Everybody knows how good a cornerback Lake Stevens senior Kasen Kinchen is.

Clinging to a 21-20 lead early in the fourth quarter, the Vikings called on Kinchen to make a play – and he did with a 54-yard reception down the middle of the field to set up a short Landeros’ touchdown run.

It was a play Kinchen estimated he scored on “five of my touchdowns” a season ago.

“We had been trying to set it up all night, just waiting for the right time to call it – and that was the perfect opportunity,” Tri said. “We had it on the left hash, and we threw a little play action, a little fly-sweep fake … and ran a crack-and-go to the top. We’ve been doing that for years, but we try and save that for big times when we need it.”

Remember the name of this first-year Vikings regular – Skyler Reyna

Kinchen and Landeros are the returning all-4A Wesco performers, and should receive the most attention from opposing defenses.

But if senior wide receiver Skyler Reyna is left in single coverage on the outside, more times than not he will make a big play – and has done that constantly over his first two starts.

Against the Abes, Reyna had a 35-yard reception in the second quarter that set up Jellison’s 14-yard touchdown pass to Landeros.

And on third-and-5 with less than two minutes to go, Reyna took an inside handoff and rumbled 10 yards to put the game on ice (he also had an 81-yard touchdown catch wiped out by an away-from-the-ball penalty in the second half).

“He is a senior who has been waiting for his turn, and this is kind of his year,” Tri said.

“I feel we’ve got five or six guys we can get the ball to that you better cover, or they will make you pay.”

Despite an 0-2 start, the talented Abes should be just fine in 2019

Sometimes this is what you get when you schedule a beefy non-league slate of games.

That is something Lincoln coach Masaki Matsumoto has been doing since he arrived in Tacoma three years ago.

And yet, after a 24-14 loss to Camas a week ago – then this loss to the reigning Class 4A state runner-up – Matsumoto remains upbeat about the kind of noise his Abes can make this season.

Much of their undoing over the final 15 minutes Friday was self-inflicted mistakes – mainly bad penalties.

“I’ve told our players, I feel really good about our team,” Matsumoto said. “It is going to be up to us coaches and players to respond.”

The Abes have a stable of quality tailbacks in Abner Sio-Fetaui, Jeddiah Hayes and Majesty Irving.

But they also have a new short-yardage “Wildcat” running back. It is 6-foot-2, 215-pound junior Julien Simon, who put that brawn on display with three consecutive runs that led to his 3-yard touchdown plunge late in third quarter.

“We cannot always be in “10” (one running back, four receivers) personnel. … We needed a goal-line or short-yardage package,” Matsumoto said. “And he is special, he really is.”

Matsumoto also noted he is going to allow quarterback Caden Filer take off and run a little more than in previous years. Filer showed effective wheels a few times Friday, especially in the second half.

“He does track just to get faster,” Matsumoto said. “This year, he can be a little more aggressive.”