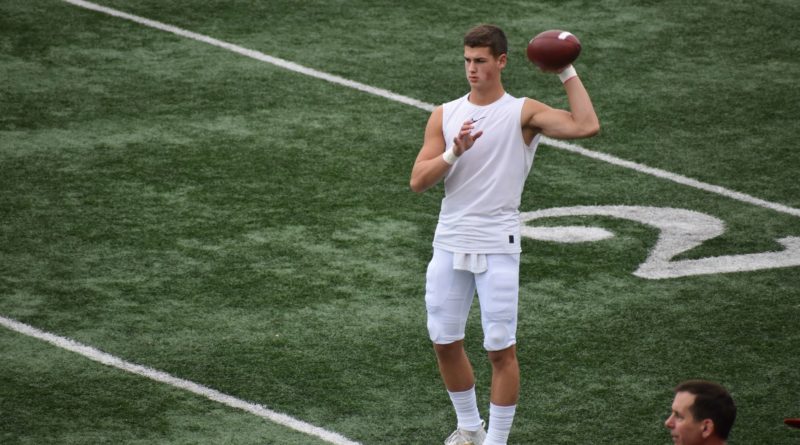 Sheldon Cross kept telling anybody who would listen that he would live to see the day of an assertive Kennedy Catholic defensive effort.

He’s now seen it in back-to-back weeks to start the 2019 season.

And the fourth-ranked Lancers were more convincing Saturday afternoon, hounding Bothell quarterback Andrew Sirmon at will in their 41-21 non-conference triumph over No, 9 Bothell at Highline District Stadium in Burien.

Here are five takeaways from the Kennedy Catholic-Bothell game:

Last week, the Kennedy Catholic gave up 100 rushing yards on 38 carries against a pretty good running back in Bethel junior Will Latu.

But that was last week. Here was Bothell’s all-4A KingCo running back Christian Galvan coming to town Saturday – the same tailback who embarrassed the Lancers for 247 rushing yards and four touchdowns in the Cougars’ 59-41 victory a year ago.

Kennedy Catholic pressed the replay button, limiting Galvan to 77 yards on 15 carries. The Cougars were held to 86 yards total on 32 rushing attempts.

“If you tell me going into the game that Christian Galvan, who we think the world of, is going to be held 77 (yards) – I will sign up for that,” Cross said. “Our guys did a great job bottling him up.”

Everybody knows Sam Huard, the passer. But do folks know he’s an athlete, too?

On the final play of the first half, Huard had to get out of trouble just to get a pass off toward the end zone.

Buying time, he initially rolled out right – but was met by the bull-rushing Elijah Vaotogo, a defensive lineman of the Cougars.

Huard sprinted back left, but another defensive lineman – Gabriel Johnson – had the quarterback set in his sights.

What Huard did next was simply an athlete making an athletic move: As Johnson came up, he got the defender enough off balance with a ball fake and stutter step that the would-be-tackler whiffed.

And Huard then put a high-arcing jump ball in the direction of Alexander near the left pylon, who outmuscled two Bothell defensive backs for a 30-yard touchdown – and 28-14 Lancers’ lead.

“(Huard) is the point guard on our basketball team, and will be a four-year starter,” Cross said. “He is athletic. He can run. He can move.”

With his vast college background, Cross wants to run a two-platoon system as much as possible at Kennedy Catholic.

But with the way his secondary has surrendered big-chuck plays over the past few seasons, the coach has shown a tendency early on this season to get the likes of Alexander (cornerback), senior wide receiver Justin Baker (free safety) and junior wide receiver Jabez Tinae (defensive end) in on more defensive plays.

That strategy worked out well Saturday. On a defensive series with six minutes to go, Baker came on to play safety. On his second play, he picked off Sirmon in the middle of the field.

“It’s our gut that tells us (when),” Cross said. “These guys want to be the ones that we can count on.”

Of the three standout receivers, Alexander is the one who feeds off emotion the most.

And when he is fully engaged, he makes the type of highlight plays that he did Saturday.

His first score came on an over-the-shoulder catch from 34 yards out in the first quarter. The second one was the 30-yarder on the final play of the first half. And his final one, a 29-yarder in the back of the end zone, put the game way (41-21) with 3:51 to go.

He finished with eight receptions for a season-high 184 yards.

“Honestly, me and Sam just have that connection,” Alexander said. “It just clicked.”

Tom Bainter has 171 wins in his 19-plus seasons as coach at Bothell, leading the 4A KingCo powerhouse to the state playoffs 17 times in 19 years – including the state title in 2014.

Cross said his team’s 59-41 loss last year to the Cougars prompted him and his staff to “look into the mirror” and determine what the next step was for the program.

“I think so highly of Bothell and Coach Bainter,” Cross said. “They are so well-coached. You have to beat them. They are a team that does not beat itself.

“This was a gratifying (win) for the program.”