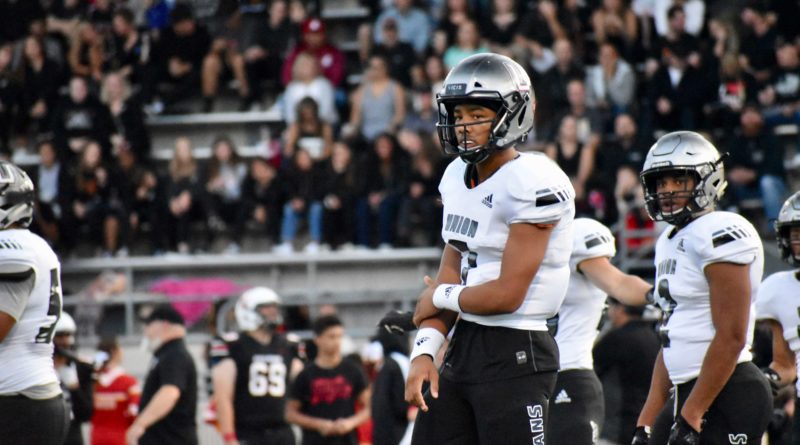 Union led 13-0 when the first flash of lightning was spotted with a little more than a minute left in the first quarter.

When play resumed, the Titans kept their foot on the gas. Jordan threw touchdowns on consecutive drives in the second quarter and Union took a 27-0 halftime lead over the Sentinels, a 2A power.

After the first bout of lightning, both teams headed into the locker room and a delay was set for 30 minutes on the game clock, per WIAA rules. Lightning flashed several times thereafter, which resulted in the clock being reset at 30 minutes.

The total delay lasted around an hour and 40 minutes.

Emeka Egbuka, Steilacoom’s five-star recruit and the top ranked junior athlete in the nation per 247 sports, logged two touchdowns in the second half to put the Sentinels on the board. But it was all Union, all night.

Here are five takeaways from the clash between two top-10 teams:

Jordan finds his groove in the air

Union quarterback Caleb Jordan was tasked with learning his third offense in as many years after transferring for his senior season, suffice to say he’s grown accustomed to learning on the fly.

And what a difference a week made.

Jordan’s four touchdowns were the most direct evidence, but the 6-foot-3 dual-threat quarterback felt more comfortable in all facets of the game on Thursday.

“Last week was a little rough, first game nerves always getting those out the way,” Jordan said. He felt more at ease “being able to stay poised and calm throughout the game, not rushing throws, taking my time actually reading and doing what we got to do to get the win.”

Jordan spent his first two years of high school at Jefferson in Portland before transferring to Clackamas (Ore.). He sought a change in culture, transferred to Union for his last season and has been tasked with filling the shoes of 4A state player of the year Lincoln Victor.

“Every week he should get better because he’s more comfortable, doesn’t have to think as much and he gets to go play,” Union coach Rory Rosenbach said.

Since the first day Jordan showed up to Union, he said he felt overwhelmingly welcome.

“Most welcome team I’ve ever had,” Jordan said. “Best teammates. It just feels like another brotherhood.”

Titans’ execution on third down makes all the difference

Union’s offense hummed for much of the night, particularly on third downs.

The Titans converted on a third and 17 on its first drive to set up its first touchdown — a 27-yard catch and scramble by sophomore Marcus Cantu. And throughout the night, Steilacoom was not able to consistently stop the Titans’ drives.

After going up 27-0 late in the second quarter, Jordan broke loose for a 30-yard run on third and 10 into Steilacoom territory.

Union’s offense has taken more time to come together after graduating the majority of its starting lineup from a year ago (14 total all-league selections departed).

Steilacoom put itself in chances to score, but was done in by costly turnovers.

An early turnover on downs spoiled a drive. A fumble at the end of a big-gain play by Isaiah Devane — forced by Union’s Logan Wilson — thwarted what would have been Steilacoom’s field position on the six yard line. And Chance McDonald’s three interceptions (all to Hoyt) gave the Union defense victories when the Sentinels were trying to build momentum.

“I felt like they outplayed us, outcoached us,” Steilacoom coach Colby Davies said. “We needed to make plays early to stay in it and we didn’t. … They made plays all night.”

Said Rosenbach: “I think they were a little tired, which is what we want to do with guys, especially since they have a lot of two-way players.”

Davies believes this loss will give his group plenty to work with as it turns the page to another tough matchup in week three at 2A power Lynden.

For much of the game, Emeka Egbuka’s offensive output was relatively subdued.

Until late in the third quarter, when Union was punting out of its own endzone. Punter Caleb Jordan sent the ball high out to the 34-yard line with Egbuka back deep, and a head start.

What exactly did he see?

Egbuka took off down the left sideline, made a cut toward the center of the field and powered into the endzone to put the Sentinels on the board.

“All game long we knew we just needed two big plays to keep us in it, and those plays never really happened in the time we needed them too,” Egbuka said.

It wasn’t a repeat performance of week one — and how could one repeat 270 yards and five receiving touchdowns?

Egbuka accounted for both of his team’s touchdowns. He caught an 18-yard touchdown pass from McDonald over two defenders in the fourth quarter.

Before the hour and 40 minute delay, Union built a 13-0 lead and carried all the momentum.

So with the long break, Rosenbach hoped it wouldn’t swing the other way. But the Sentinel faithful, many of whom stayed for the long haul — all the way until the final horn sounded at 11:17 p.m. — did not get their version of the Super Bowl 47, in which the momentum swung in lock step with a power outage delay.

“They have an opportunity to regroup, get a break,” Rosenabch said. “That was a huge advantage for them, and you never know how you’re going to respond. I’ve never been in a situation like that.”

Union responded all right. The Titans’ 27-point lead going into half grew even more in the second, and the Sentinels were never within striking distance.