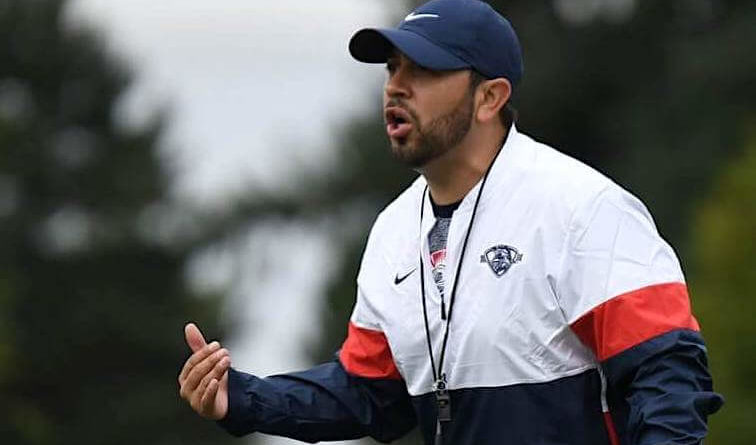 It was a spring day after a track invitational and Brian Rodriguez and Scott Rice sat across from each other at a Mexican restaurant across the street from Battle Ground High School.

The two friends, who were there to iron out a deal, got their start in coaching together. After being hired at Skyview around the same time, the young bucks in the tight-knit coaching tree of Skyview head coach Steve Kizer planned, prepared and schemed for the day their coaching careers would take off.

And here they were, just a few years later, both new head coaches, facing a situation that wasn’t in the plan: playing against each other.

On Friday, Rodriguez and his King’s Way Christian team will drive 15 minutes north up Interstate-5 to play Rice’s Ridgefield squad. The two programs helmed by energetic coaches, both hired to build sustainable winning cultures, will go head to head.

And in a measure of sportsmanship, the Knights will receive a 40 percent split of the gate, Ridgefield athletic director Brynan Shipley confirmed, which will at least partially mitigate the cost of a lost home game — the very reason both teams needed a home game in the first place.

It’s uncommon for two out-of-district schools to share the gate. Rodriguez credited Ridgefield’s integrity and his friendship with Rice. If a deal had not been struck, both teams would have needed to wait until week four to play their first home games, which proves costly, particularly for small programs such as Rodriguez’s.

But this game goes much deeper than the gate for the two head coaches. For years, they had hoped to take their next steps together after honing their craft at Skyview.

And they wanted to bring with them the family-focused coaching culture that Kizer fostered among his staff. From weekly barbecues with each others’ families to offseason family vacations to Las Vegas and Mexico, Kizer’s coaching staff is as close as they come.

“The family thing, coaches getting along, wives getting along, kids growing up together,” Kizer said, “it’s the coolest part of high school football. You hear horror stories all the time. (Coaches) make (up to) $5,000 a year, you better make it fun.”

Going back to his early days at Skyview, Rice had long desired the Ridgefield job. A Ridgefield resident — as is Kizer and Skyview quarterbacks coach Eric Rice, Scott’s brother — Rice bided his time as the Storm’s offensive line coach and knew once the job opened, he would leap at it. This past January, he got the job.

Originally, the plan was to take Rodriguez — or “B-Rod,” as he calls him — with him as his offensive coordinator.

“We always had the vision the past three or four years that I’d get this job out here and he’d just come with me and be my offensive coordinator,” Rice said. “I called him, I was like, ‘hey, are you coming or not?’ ”

But Rice knew Rodriguez’s loyalty. He knew he wasn’t going anywhere. Rodriguez was hired as the head coach at King’s Way in May 2018, the fourth football coach in four years for the Knights. In his short tenure he has seen increased participation, a new set of grandstands and what he calls an exciting new vibe on campus surrounding the football team after an 0-5 season in the 1A Trico League last year.

“These things take time,” Rodriguez said. “Scott knows that too and I warned him in this process. Everything that’s worth it takes time. Skyview took time. La Center took time, but look at their programs now.”

Last Thursday, Rodriguez and Rice ran into each other at the grocery store after practice and officially agreed to exchange t-shirts from one another’s programs after the game on the field as a sign of respect.

Even in the thick of competition, their friendship is not lost on one another.

“It’s really exciting,” Rodriguez said. “Two friends that had the vision one day to be head coaches, came earlier than expected, and then to face each other it’s just really, really fun. And at the end of the game, we’re still friends regardless.”