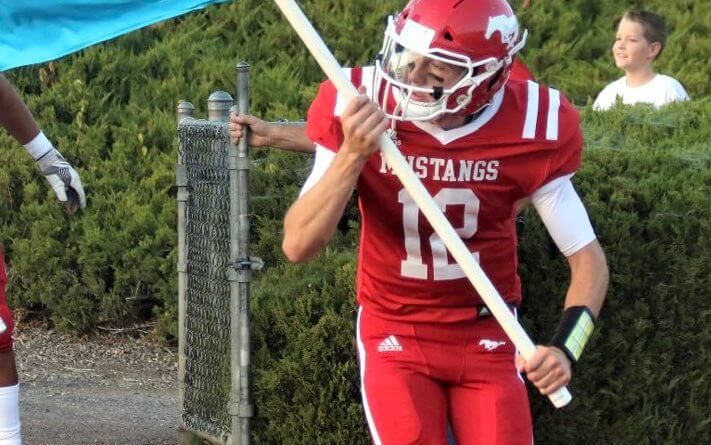 And his football career is now over after two-plus seasons.

The Mustangs’ junior had surgery Monday for a broken collarbone — an injury he suffered in the team’s 35-13 season-opening loss to Sunnyside on Friday night.

Before that surgery, Hicks announced on Twitter that he was leaving football for good.

“And just like that … my (high school) career for football is over. … Didn’t want it to ever end, especially so soon. But with all the injuries I have gone through, it’s time to hang up the cleats.”

The 6-foot-2 Hicks has other options, too. He is a starter on the basketball team. And last spring in his first year in track and field, he set the school’s high jump mark — and was a Class 2A state placer.

And Ingvalson tailored the passing offense to his new starter, installing more play-action rollout plays to get Hicks on the move.

Hicks threw for nearly 200 yards in the opener Friday before getting injured late. His sophomore season was cut short after six games because of a back injury.

Now the Mustangs will turn to sophomore Kaiden Rivera, a taller pocket passer, to run the offense for the sixth-ranked Mustangs when they travel to West Valley of Yakima on Friday.

“He is a big baseball guy who can sling it,” Ingvalson said. “We are going to play fast and throw it around.”

A year later, no surprises at Chiawana

A year ago, J.P. Zamora was thrust into action at quarterback as a ninth grader for Chiawana because of an injury. Needless to say, he was in a bit over his head in the team’s 19-0 victory over Richland.

But on Friday, Zamora was a different guy. He passed for 202 yards and four touchdowns in the Riverhawks’ 38-7 win over the Bombers in a heavyweight Mid-Columbia Conference showdown.

All four scoring passes went to different wide receivers — including a 30-yarder to Kobe Young just minutes into the second half that broke the game open.

“He has obviously matured in a year, and is a lot more confident in what he is doing because he is the guy,” Chiawana coach Steve Graff said. “He has risen to the challenge.”

The top four contenders in the 4A Greater Spokane League all debuted winners last weekend.

The big shocker was Central Valley coming over and dominating 3A powerhouse Bellevue, 27-10, handing the Wolverines their worst home loss since 2015. The Bears moved into the 4A ranking at No. 10.