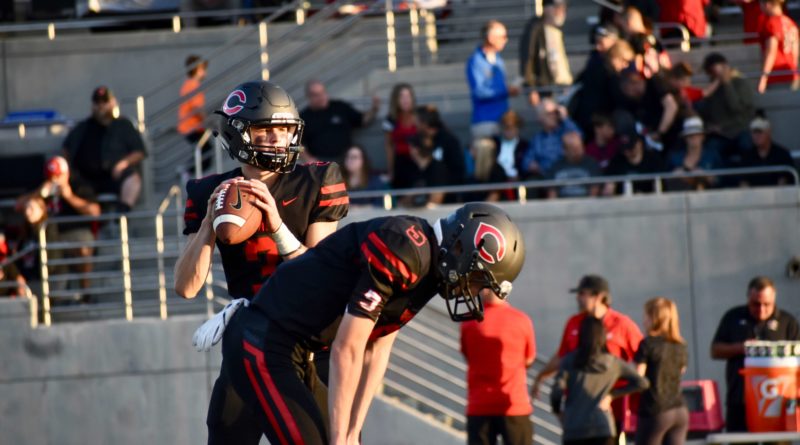 CAMAS — Jon Eagle said Camas has been waiting for more than a year to get another swing at Lincoln — the team his Papermakers’ epic comeback efforts fell short against in Tacoma in week one last season.

On Friday night at Doc Harris Stadium, Camas got what it came for.

The Papermakers used two red zone interceptions to spark a 24-14 win over the Abes. Both are ranked in the top-10 in Scorebook Live’s preseason rankings.

Here are five takeaways from game:

Walk around the Camas football program on any given day, you’re almost guaranteed to run into a t-shirt that reads: revenge tour 2019, referencing the Papermakers’ five losses last season (5-5 overall., each coming by a collective 18 points.

On Friday night, it was much more than just an overblown saying.

“We had a hard loss season,” Stephen said. “We just came back harder. We’re not going to lose without a fight.

Caden Filer threw for more than 300 yards. He threw the ball more than 60 times.

And why wouldn’t he? Four-star Julien Simon and three-stars Donovan Clark and Jaylen Clark make up the Abes’ offense. The majority of the Abes’ passes were short yardage dump-offs, screens and quick out routes, leaving ample opportunity for the receiver to make a play.

If it weren’t for Filer’s two picks in the red zone — first to Blake Ascuitto, then to Charlie Bump — the Abes could have significantly altered the cadence of the game over the last quarter.

“Blair to Clemmer?” Get used to hearing it

Through the offseason, Camas quarterback Jake Blair and receiver Jackson Clemmer practiced connecting on routes on the grass field adjacent to Doc Harris Stadium, mimicking the intensity of game situations.

Blair completed five of his 11 passes to Jackson Clemmer, who accounted for 131 of his 171 passing yards and both touchdowns. The two strung together a more than 90-yard touchdown drive in a minute to close out the third

Clemmer, who measures at 6-foot-6 (nearly 6-7), was questionable more most of the week after tweaking his knee. But the senior, who Eagle has been high on as the team’s top target poised for a breakout season, found a brace that fit his specific needs on Wednesday afternoon and was fine to play.

Blair steps in as the starting quarterback this season after starting for bits and pieces of his sophomore year. And Clemmer steps up as the team’s top option in the wake of now-Air Force wideout Luc Sturbelle leaving.

“We always had the timing,” Clemmer said. “Even though there was nobody there, it was just the three of us, you’ve still got to go hard like it’s a game situation.

The Camas Papermakers have never been known as a run-first team.

But with two of Lincoln’s key defensive linemen — Tuaoa Tauiliili and Jeremiah Lenard — sidelined with injuries, the Papermakers and its vaunted line saw the run game flourish.

Junior running back Jacques Badaloto-Birdsell logged 171 yards on the ground at 9.5 yards per carry, including a 63-yard touchdown to give Camas a two-score lead at the start of the third quarter.

Should we expect to see more of the run game, which was more effective than pass game, throughout the season? Friday night proved it’s a viable option.

Game planning for a receiver like Jaylen Clark is one thing. Defending him in a game is wholly another.

That’s why Jon Eagle sought out Clark in the handshake lineup after the game and let him know how impressive his performance was. How many great plays Clark, a three-star athlete, make, including a one-handed grab in double coverage late in the game?

“I’ve been playing with (Caden Filer) since fourth grade,” Clark said. “I know where he’s going to put it every time.”

Both Clark’s touchdown passes were a simple x-receiver isos in the corner of the end zone. But they were done in double, sometimes triple coverage. He made plays that admittedly made Eagle shrug.

“We play a bend-but-don’t-break defense,” Eagle said. “But they’re so athletic, very hard to tackle.

“The guy’s making a spectacular play, there’s nothing you can do.”