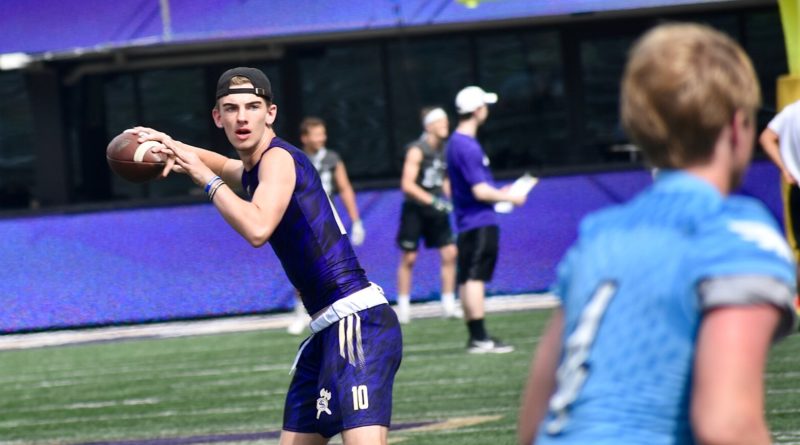 1. How many repeat state champions will there be in 2019?

Fairly confident in two — Odessa (1B) and Eastside Catholic (3A). And it very well could be three if Hockinson figures out how to move on without injured standout wide receiver/linebacker Sawyer Racanelli in 2A.

With seven returning starters on both sides of the ball (in eight-man football), led by reigning 1B state player of the year Marcus King at tailback, Odessa will be an even more convincing favorite to defend its crown this season.

And even though Eastside Catholic has a new head coach (Dominic Daste), new offensive coordinator (Drew Miller) and first-time starting quarterback (Hawaii transfer Lohgan Muasau), the senior-driven Crusaders have more established marquee players in the state — by a mile-wide margin.

Union (4A), Colville (1A) and Kalama (2B) all lost state-player-of-the-year senior quarterbacks from their 2018 championship squads, but should have enough returning talent to easily make it back to the playoffs.

Think about the rate in which Kennedy Catholic quarterback Sam Huard is racking up passing yards.

Last season, he passed for a personal-best 4,141 yards, which is easily inside the top 10 in state history.

His team also left four potential games on the table by not advancing out of the Class 4A district playoffs.

This sets up to be a historic season for Huard — if the Lancers can take care of business as a team.

How historic? The single-season passing mark is 4,600 yards, set by Prosser’s Kellen Moore in 2005. That is easily attainable.

And beyond that? There have been 34 seasons of 5,000 or more passing yards posted in national history, according to various lists, including the National Federation of State High School Associations (NFHS).

Given that Huard has virtually all of his key pieces back in the passing game, as well as adding Sav’ell Smalls — he very well could get to 5,000 yards.

3. Who is the biggest must-see talent in the state?

Smalls might register a number of crazy-angle sacks this season at Kennedy Catholic, and Ohio State commit Gee Scott Jr. might set a state record for most acrobatic one-handed pass receptions in a season.

But the most dominant player in the state is Scott’s teammate with the Crusaders — junior Jaylahn (J.T.) Tuimoloau, arguably the top class of 2021 recruit in the country at defensive tackle.

For a guy his size (6-foot-5, 280 pounds), his combination of burst and bull-like power is unmatched. He showcased that on national television last December with three sacks (and five tackles for loss) as the Crusaders dominated Centennial (Ariz.), 17-0, in ESPN’s State Champions Bowl Series.

In all, he had 17 tackles (including seven sacks) for loss as a sophomore. Last month, he was selected on the all-USA Today preseason defensive team for 2019.

4. What never-been-to-the-state-championship-game programs are so boringly consistent, they continue to fly under the radar?

In 4A, Glacier Peak: The Grizzles have never had a losing season in their 11 seasons of football — and have made the playoffs in each of those years.

Six times, they have won eight or more games.

And last season, not only did they give 4A runner-up Lake Stevens its closest game during the regular season, they likely would have likely snapped their three-year absence from being in the state playoffs had quarterback Ayden Ziomas not suffered a season-ending injury in a district-round loss to Eastlake.

In 3A, Timberline: The Blazers have reached the postseason for 11 consecutive seasons, including all 10 years Nick Mullen has been the coach.

Six times during that span, they have won eight or more games.

And for the first time in school history, Timberline posted back-to-back trips to the 3A quarterfinals last season when it defeated Mount Spokane in the first round before losing to Eastside Catholic in the round of eight.

5. Who are Scorebook Live’s picks to win the state titles in each classification?

4A: Lake Stevens over Graham-Kapowsin.

3A: Eastside Catholic over Mount Spokane.

2A: Steilacoom over Hockinson.

1A: Royal over Newport.

2B: Chewelah over Kalama.

1B: Odessa over Neah Bay.