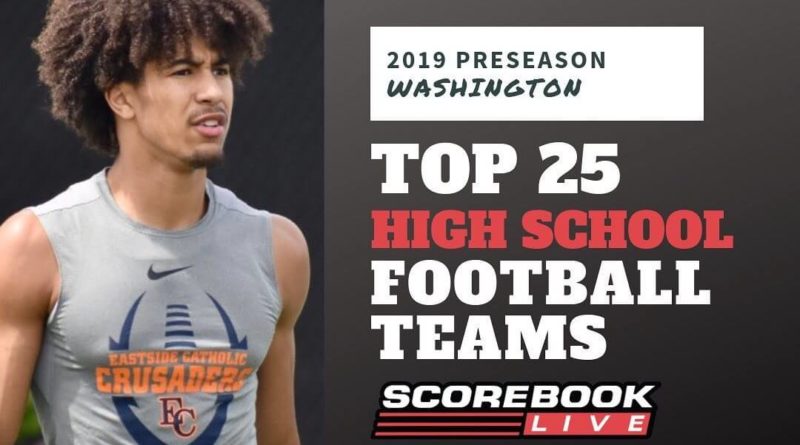 Scorebook Live Washington ranked the top-25 high school football teams in the state of Washington, regardless of classification.

Here is the preseason list, 1 through 25, as compiled by Scorebook Live Washington reporters Andy Buhler and Todd Milles:

Only Washington school ranked in USA Today’s “Super 25 preseason rankings” (No. 21), the roster is flat-out ridiculous

Vikings would surely trade in one of their six consecutive 4A Wesco titles for another shot at the state title.

The 4A KingCo champions are big, talented and experienced – and have sniffed a state title the past two years.

Funny, you lose one of the state’s all-time leading passers — and now the Eagles are in 4A title conversation?

The Lancers have the most dynamic offense in the state. But can a defense that allowed 38 points per game turn a corner?

Abes oozing with top-flight talent, but need to get past first-round-of-state roadblock of the past couple of seasons.

Legendary coach Steve Graff approaching 200 career wins, but could he haul in a fifth state championship as well?

The Wolverines might lack star power, but their RB tandem of Alex Reid and Joby Schneider can make you see “stars.”

Big loss with WR Sawyer Racanelli (knee) out for the season, but Hawks have plenty of other options to carry the load.

2018 state semifinalists might have to reign in high-flying passing game early on – until QB Luke Holcomb is ready.

Lancers are talented and together, and boast arguably the best linebacking corps in state, led by Devon Nofoa-Masoe.

Could be the most talented Steilacoom team in program history with a sure-fire target in top recruit, WR Emeka Egbuka.

Few teams are better in the trenches. Camas returns one of the most imposing lines in the state.

Might be best team in GSL, regardless of classification. Sleeper out of Eastern Washington loaded for run.

Don Bartel’s teams have always had athletes who can run. Now this group has a returning quarterback (Grady Robison).

No player in the state might touch the football more in 2019 than RB Christian Galvan, an underrated star

Seahawks are South Sound’s model of consistency (reached quarterfinals in 6 of 7 years), and return most of starting lineup.

The defending 4A state champions are calling upon a lot of new faces. Will it be enough for a repeat effort?

QB Clay Millen might not have logged a varsity start yet, but all he has ever done is win games — at every level.

Though undersized, no 4A GSHL squad returns more talent in the skill positions than the Storm.

If state championships came down to arm strength, Bears would win behind bullet passes from QB Matt Gabbert.