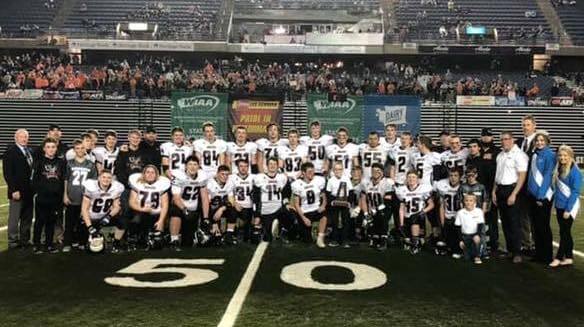 The Almira/Coulee-Hartline Warriors — winners of two of the last four Washington 1B football state titles — are ranked No. 2 in Scorebook Live Washington’s preseason 1B football Top 10. Here’s an inside look at the 2019 Warriors.

Almira/Coulee-Hartline went 12-2 overall and 6-1 in the 1B Northeast League (second place) last season. They lost to Odessa 63-12 in the 1B state championship.

Started under center as a freshman. Now as a sophomore, Isaak is the anchor in the middle. He’s experienced, and will be leaned on to lead. In addition to imposing size, he is technically sound, strong and moves well.

A hard, physical runner, Schafer excels after contact and his hands out of the backfield makes him a receiving threat. Likely will lead the defense in tackles.

The last two 1B state title games have featured Almira/Coulee-Hartline, and the Warriors are determined to get back this season. To do so, they must rely on the four returning starters, and a core of sophomores to replace the 10 seniors lost from the state runner-up last season. “We have holes to fill,” coach Brandon Walsh said. It’s not unreasonable to think ACH, under Walsh for the 21st year, can do just that. Reece Isaak, a 6-foot-4, 255-pound center and defensive end anchors the line, and quarterback Dane Isaak — Reece Isaak’s first cousin — headlines a grouping of five sophomores tabbed for a bigger role. League opponents Odessa and ACH met in the 1B state title last season. And with the seeding committee back, it’s possible the two could be on opposite sides of the bracket out of the same league — again.