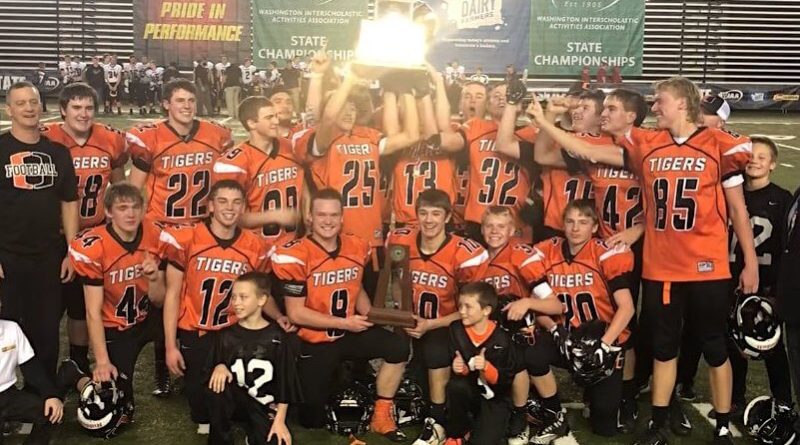 The defending 1B state champion Odessa Tigers are ranked No. 1 in Scorebook Live Washington’s preseason 1B football Top 10. Here’s an inside look at the 2019 Tigers.

The reigning 1B state player of the year, King rushed for 1,539 yards on 14.9 yards per carry and 42 total touchdowns last season. A make-you-miss back in open space who can also run through defenders.

A power back that is “silky smooth” between tackles and surprises teams in space according to coach Jeff Nelson, Clark is a hard-hitting lead blocker and among Odessa’s top two-way players. On offense, he’s a lead blocker with reliable hands, which the Tigers utilize in play action. At linebacker, he’s a defensive leader and perhaps the team’s hardest hitter.

The top lineman in 1B last season returns. Hunt is Odessa’s biggest player, and is also the one in command. The center runs the offensive line, calls plays and tells everyone the block schemes. Invaluable to the Tigers’ cohesion.

A year ago, head coach Jeff Nelson felt his team was underestimated. Now, the Odessa Tigers are the team to beat in 1B. Coming off their first state championship in 25 years last season, somehow, things are looking up. The Tigers bring back most of that team, including the reigning Associated Press 1B state player of the year Marcus King, who rushed for over 1,5000 yards and 29 touchdowns on 14.9 yards per carry last season. Head coach Jeff Nelson won five state championships as the coach of Lacrosse Washtucna, and it took him four years to bring Odessa a trophy, which begs the question: are the Tigers headed toward a 1B dynasty? Nelson isn’t thinking that far ahead. “Can’t let up,” he said. “We can’t get fat and happy and sit there and think we have everyone back and it will be easy. Now people are gunning for us.”