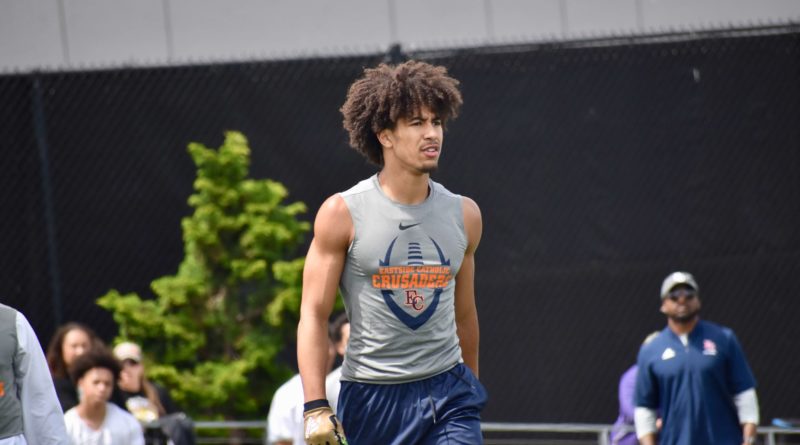 The incoming senior and member of the class of 2020, who committed to University of Washington on Sunday morning, was building a name for himself on the recruiting scene for quick footwork, make-you-miss jukes and explosive speed.

But Daste, then the Crusaders’ offensive line coach, saw a transformation in Adams II’s body, the blend of gaining weight while maintaining speed many high school athletes seek a balance with. And he says those who watch him based off of his highlight tape don’t have the full picture.

“He can run away from people obviously and make people miss, but I think he’s an extremely underrated physical runner.”

Heavily recruited at safety as well as running back, Adams II — a four-star, per 247 Sports — expressed a desire to play running back in college. And he wasn’t short of options — on either sides of the ball — fielding offers from Alabama, Florida, Ohio State and nearly every Pac-12 school.

As the offensive line coach last season for the 3A state champions, Daste worked with the running backs a bit too and was impressed with Adams II’s thirst for knowledge.

He rushed for 929 yards on 9.9 yards per carry and 17 touchdowns as a junior, according to MaxPreps. And going into the season, the 6-foot-2, 200-pound back was a quick study on the O-line’s blocking schemes.

That’s why Daste, who is also a former UW lineman, believes he will be a great college running back.

“I think he’s going to be a great running back,” Daste said. “He has such a feel and his ability to see things and his vision because he’s such a student of the game. That pace of game’s obviously going to be a little different at the next level, but I don’t think that thirst for knowledge and his competitiveness and his approach to the game will change.”