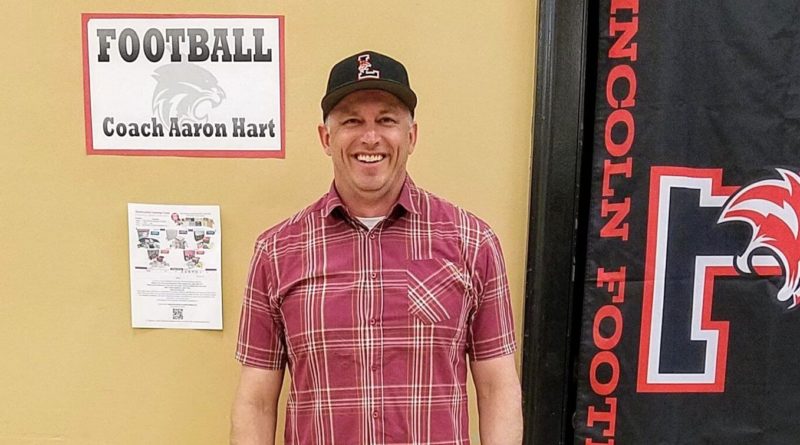 Aaron Hart has a college rodeo background. He is used to tying up loose ends.

And as the new Lincoln High School of Seattle football program prepares to relaunch this fall, Hart is the one in charge of roping together the good old days with new beginnings.

“I think it is important,” Hart said, “to keep that together.”

New schools seem to open up all over the state every few years, struggling to find their way initially in varsity athletics.

Lincoln is in a different position altogether. As far back as when the old school opened in 1907, it was a city powerhouse in many sports, including football — and was a huge presence as a Metro League member up until it closed in 1981.

And Lincoln had one of the city’s most successful football coaches leading the way in Bill Nollan, who won 104 games in a 27-year span (1929-55), including numerous metro titles.

But now, after a 39-year absence, can those illustrious memories be rekindled?

Hart thinks it will take some time.

In the meantime, what a journey stop for Hart, 47, who is a high school head coach for the first time.

Hart was raised on the Wind River Indian Reservation in Wyoming before graduating from Riverton High School in 1990.

He was a sought-after linebacker who ended up playing for a couple seasons at the University of Mary in North Dakota.

Hart took a year off from college to work, then enrolled at Laramie (Wyo.) County Community College to compete in rodeo for one year.

Then in 1994, he packed up his car and headed west to Seattle, with no job and little money to speak of, to start a new life.

“I used to love football so much,” Hart said. “But I quit watching it on TV because I could not deal with it.”

After settling down with a job that required lots of travel, and starting a family in the Wallingford neighborhood, Hart’s wife suggested he get into coaching their son’s youth baseball team – the North Central Little League – in 2010.

From there, he coached a core group of boys that were Knut’s age in baseball, football and lacrosse.

Last season, Hart dipped into the high school scene as the linebacker/tight end coach at Roosevelt High School — but with an eye on taking over the head job at the school opening right down the street in 2019.

“It was kind of an obligation that we should put the best foot forward and have it be this community thing (at Lincoln),” Hart said.

For spring football, Hart said he had 30 players report. Most of them, including his son, were ninth graders.

Because of low numbers, and the youthful nature of the roster, Lincoln will play no varsity games in 2019. Instead, it has scheduled up to eight junior varsity/’C’ team games, Hart said.

As far as a weight room and practice field, the team is not allowed on campus yet because it is still under construction. For the time being, Lincoln will either practice at Roosevelt, Lower Woodland Park or Memorial Stadium, where it will play its home games.

Eventually, Hart wants to blend in some of the program’s rich history into the current model.

The first notable alumnus he visited was Scott Barton, a member of the class of 1964 who went on to play football at Washington State University, in Anacortes.

“He walked (me) through and told us about how their practices were, how they practiced at Lower Woodland … and about their spring practices and how seniors ran conditioning,” Hart said. “He also ran through songs they sang, and different players of that era.”

Hart said his players will adopt the old fight song, abide by the school’s previous nickname (Lynx) and wear the past colors (crimson and black).

“I also want to get some of the older rivalries set up,” Hart said.