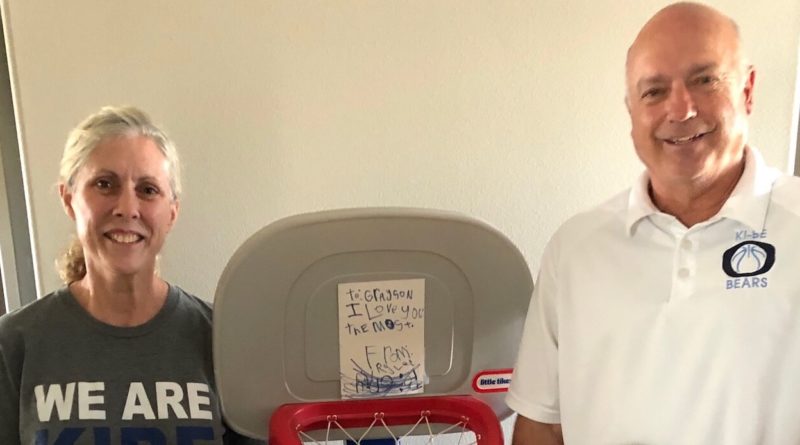 If you want to see how retirement plans can go awry quickly, just visit this pair of longtime basketball coaches.

Mark and Colleen Wells have been married for 43 years. For 40 of them, one or both of them have coached in the high school or college ranks around the state of Washington.

And when Colleen finished up her final season with the girls squad at Capital High School in 2017, the couple was finally ready to put its family-first retirement plan in full motion.

But a year after moving into a new house in West Richland, the Wells’ duo found a second “hardwood” home right down the road — at tiny Kiona-Benton High School.

But frankly, this story isn’t about the wins and losses. It is about how this quickly became the most interesting stop on their winding journey together.

Mark Wells won an NCAA Division II men’s title in 1976 as the starting point guard at the University of Puget Sound.

“I learn something from him every time I watch him coach,” Colleen Wells said.

Of the two, Colleen Wells had the longest continuous head-coaching tenure — 16 seasons at Capital (2001-2017), leading the Cougars to a fifth-place finish at the Class 3A championships in 2010.

When it was over, they thought, it was over. Retirement meant spending more time around their three adult children and two young grandchildren, Rylee and Grayson.

In that first year in their new surroundings, the Wells’ would occasionally sneak out to catch a local high school basketball game at Chiawana, Hanford or Kamiakin.

Last August, Colleen noticed the same coaching position was open again — Kiona-Benton girls basketball in the town of Benton City, which was 15-20 minutes from their house.

“I was truly missing (coaching),” Colleen said. “And I saw (Kiona-Benton) had gone (1-19), and their coach kind of disappeared after that.”

Colleen met with den Boer, who used to be the state’s all-time scoring leader from Sunnyside Christian (2,851 points) until Kittitas standout Brock Ravet broke it last season, about the job.

Den Boer hired her, but then shared some bad news — his boys coach had also decided to leave on short notice.

“I told him I was living with a good basketball coach — my husband,” Colleen said.

Colleen, 64, became the third new girls coach in as many seasons. She admitted one of the biggest challenges with her 16 players was “winning them over.”

“Why would they give their allegiance to me if there was a chance I would leave?” Colleen said.

Much of Colleen’s first-season focus with her players was twofold: Improving on-court skills and inspiring off-court goal-setting.

“And my goal for the season, every team we played the second time, we were better against,” Colleen said. “And we were.”

Before agreeing to coach the Kiona-Benton boys, Mark Wells had not been a varsity head coach in 36 years.

But since the two squads played same-site doubleheaders, Mark, 65, said he welcomed the chance to share this final coaching experience with his wife.

That meant being able to take the same bus home from away games. And when it was his turn to coach after the girls’ game, Colleen often kept the boys’ scorebook at the end of the bench.

Because neither team boasts much height, the Wells’ coaching tandem has spent much of the offseason installing a new “1-4 high stack” motion offense for both squads as they head into their second seasons next fall.

“We are feeling a lot better about what we are doing,” Mark said. “And (the players) now know what is going on.”

So do Mark and Colleen Wells — in their new retirement plan.

“These girls I coach,” Colleen said, “they fill my heart.”