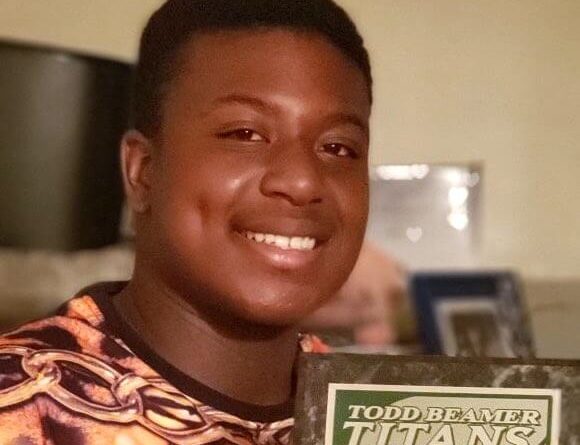 It’s rather significant, because based on the presence of his enormous frame — 6-foot-5, 295 pounds, size-19 feet — many people figured he passed that age milestone years ago.

“A lot of times when we go grocery shopping, people will ask my parents, ‘How tall is your child?’ And they will say 6-5,” Agbo said. “But then they hear that I am 14, and cannot (believe it).

“I have always been big.”

And right now, the starting right tackle at Beamer High School in Federal Way is a wanted big man on the football recruiting trail as a sophomore-to-be for the Titans.

Much of the recent attention has been off a strong showing during spring football — on both sides of the line of scrimmage.

“I have always thought (his future) was on offense, because that is where we’ve played him,” Beamer coach Darren McKay said. “But this spring, we moved him to defensive end from the interior, and I was pleasantly surprised how well he picked up staying square at the line of scrimmage, and not over-penetrating (into the backfield).”

As the offers have come in, Agbo proudly celebrates those recruiting victories in a unique manner.

For example, when the offer from Tennessee came in a few weeks ago, Agbo and his mother, Giada Blakemore, drove up to The Commons at Federal Way (formerly Sea-Tac Mall) to buy a hat representing that university.

The next day, Agbo wore that Volunteers’ hat around campus for all to see.

When the UW offer came in a week later, same thing — trip to the mall, purple-and-gold “W” hat on the head at school.

“I mean, you are glad they offered, so you want to show your appreciation,” Agbo said. “And as long as my mom and dad fund it, I will keep doing it.”

Agbo displays a mature disposition well beyond his years. He regularly greets strangers with a welcoming smile and a firm handshake.

He is so socially engaging, classmates want to be around him constantly.

And he seems to grow an inch or two every month, now closely approaching the size of his uncle Curtis Kitchen (6-9, 235), who played one season (1986-87) in the NBA with the Seattle Supersonics out of South Florida.

And neither is his attention. In fact, that is just starting to get good.

“I’ve got to put on a show for everybody,” said Agbo, who also plays basketball and throws the shot put during track and field season. “That will happen if I use my size and talent well.”