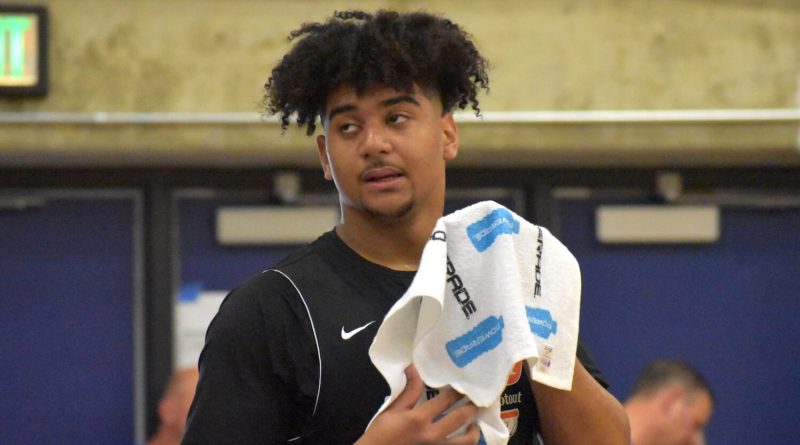 One of the surprise late additions at last weekend’s WIBCA/WIAA Northwest Recruitment Showcase was Eastside Catholic big man J.T. Tuimoloau, the No. 2 football recruit in the country for the class of 2021.

And, of course, the two-sport standout quickly showed 75-100 basketball coaches that he could dominate on the court, too.

Here is Scorebook Live’s Q&A with Tuimoloau at the NCAA Division I basketball event at Bellevue College:

Q: You were a late addition to the WIBCA/WIAA Division I showcase this weekend. Given that you are a top football recruit, you must love basketball?

A: “We forgot to (send in invitation), so we did it Wednesday morning. … I really love basketball. Growing, I loved football and basketball. They were my two favorite sports.”

Q: If you chose to give up football for basketball, how high a ceiling as a recruit do you think you’d have?

A: “My goal has always been to go D1. If I didn’t have football, my goal would be to go D1 in basketball, but I’d be blessed with whatever (scholarship) offer I received.”

Q: You are ranked as the consensus first or second high school football recruit in the country for the class of 2021. What is that like being so prominently rated and promoted?

A: “It is a true blessing, but I also know it is my chance to improve my game. I know there is somebody always working harder than you, The way I look at it, there are a lot of guys who are not ranked but then you see them make a big name for themselves in college and the NFL, so for me, those rankings do not mean anything but it is an honor … to be ranked No. 1.”

Q: You guys won a Class 3A state football title at Eastside Catholic last season, and won a nationally-televised game after that. What was your favorite personal play or moment of the season?

A: “My favorite play … was when we ran a fake field goal and they threw a jump ball to me, and I caught it over two people. It was against Bellevue at Poo Keeney in the playoffs.”

Q: What football skill have you worked the hardest at to improve before your junior season at Eastside Catholic?

A: “There are a few – my get-off speed; watching what I eat in my diet; toning up and losing all the fat, and turning the baby fat into muscle. I’ve worked on everything to improve my game.”

Q: You have a new head coach at Eastside Catholic in Dominic Daste. How are things different with him in charge?

A: “It has been the same. It’s not like Coach Dom is new – he’s always been one of our coaches. It is good. We have not lost our team chemistry. We are all still family, so yeah, it has been good.”