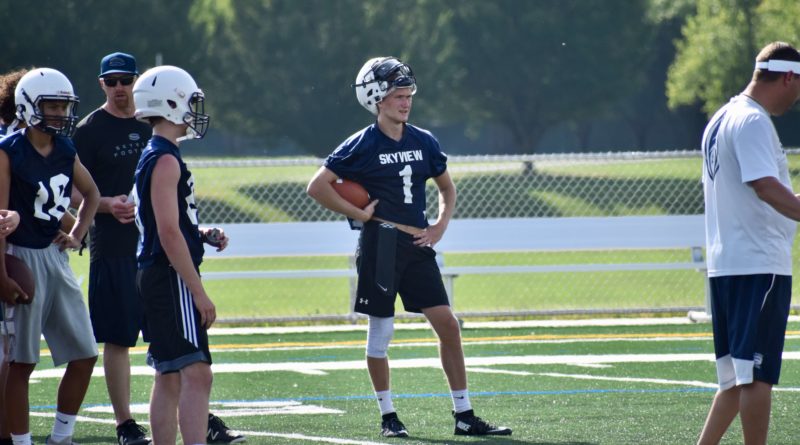 Yaro Duvalko and Mike Sanford Jr. both like movies.

Duvalko shared a project he was working on about influential Americans, for which he chose the late comedic actor Robin Williams, and the two connected over one of his famous quotes: “You’re only given a little spark of madness. And if you lose that, you’re nothing.”

That little spark of madness is something Duvalko, a quarterback at Skyview High School (Vancouver) and Sanford Jr., the Utah State offensive coordinator, have in common, Duvalko said. And it sheds light into the relationship that drove Duvalko, an incoming senior, to commit to Utah State on Wednesday.

Sanford Jr.’s recruiting pitch to Duvalko led with a stat: he’s put six quarterbacks in the NFL over the course of his coaching career, which included stops at Stanford, Yale, Boise State, Notre Dame and Western Kentucky, where he was the head coach for two seasons.

“He told me I’m going to be his seventh,” Duvalko said.

That tipped the scales for Duvalko, a 6-foot-3, 185 pound pro-style quarterback. As a junior, he was a first-team all-4A Greater St. Helens League selection, and is listed as a three-star recruit by the recruiting site 247 Sports.

He talked the most with Cal, Oregon State and Wyoming, and all made trips to Skyview to see him throw, but none of the three had offered him.

“A lot of coaches came out to see me, Utah State was immediately sold,” Duvalko said. “Immediately they had confidence in me, I was their guy in me right away. They believe in me the most. I could list a bunch of coaches who have seen me throw, not gotten back to me or taken a while.”

Meanwhile, Duvalko was sold on Utah State, citing the school’s Human Movement Science program in addition to its coaching staff. And it seemed the coaching staff was sold on him. He took an unofficial visit the weekend before committing.

The final step was getting his parents on board, which just took convincing them what he already felt.