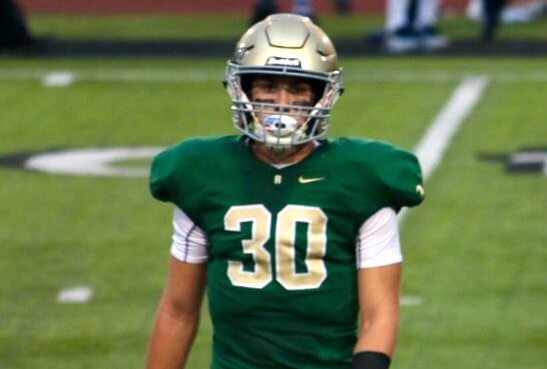 In one short year since taking over at Redmond High School, football coach Mickey Ahrens has seen Carson Bruener do a lot of crazy-cool things.

He has casually picked up a basketball and swished a half court shot.

And in his football gear, Bruener not only rocketed a 25-yard soccer shot in the upper right corner of the goal after practice — he called his shot before doing it.

“He is one of the most amazing athletes I have ever been around,” Ahrens said.

Bruener, a 6-foot-3, 205-pound senior, gave an oral commitment to the same university his father, Mark played for — the University of Washington — on Friday.

Whereas his father was one of the best tight ends in Huskies’ history, and an NFL first-round draft pick, Bruener is going to the UW as an inside linebacker. He is the reigning Pac-12 champions’ seventh commit for the 2020 class — and the first on the defensive side of the ball.

“It’s his speed and athleticism along with the size,” Ahrens said. “He can play in the box and fill gaps tackle to tackle. The guy has a motor with speed. Anything that hits the perimeter, he reacts and gets too.”

The Huskies offered Bruener a scholarship last week, and Ahrens said his standout told him he was going to wait until December before announcing a school.

“I think once it happened, and it became real, everything changed for him,” Ahrens said.

Bruener chose the UW over other front-runners Oregon and California. Utah, Wisconsin and Northwestern were also part of the 10-12 schools that offered scholarships.

Bruener has missed spring football because of a shoulder injury, but Ahrens said the teenager would be ready for preseason camp.