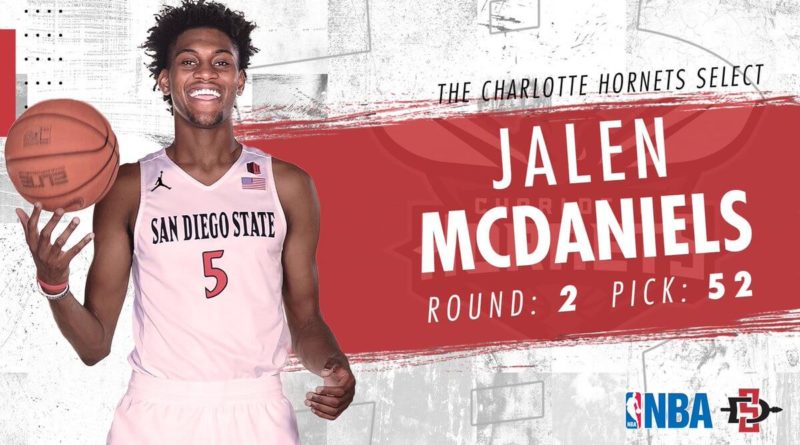 Jalen McDaniels, a Federal Way product and former San Diego State forward, was selected by the Charlotte Hornets with the 52nd pick in the NBA Draft.

The 6-foot-10, 195 pound forward is long, athletic and exudes potential after playing two seasons at San Diego State. His sophomore season, he averaged 15.9 points, and 8.3 rebounds per game on 49.5 percent shooting.

At Federal Way, McDaniels blossomed into a four-star recruit. As a senior, he averaged 19 points, 10 boards and was an Associated Press first team all-state selection at the 4A level.

But in recent months, controversy has followed McDaniels. Earlier this month, he admitted to King County Superior Court that he used his phone to film two separate women performing intimate acts without their permission and shared the recordings with friends.

ESPN analyst Jay Bilas said on the Scorebook Live Today podcast this week that McDaniels’ college campaign at SDSU was underwhelming, but said his upside, if he adds strength, should be promising.

“Just on the floor stuff, he’s got a 7-foot wingspan, he’s about 6’10 I’d say, and he has a lot of talent,”  With the ball in his hands he could be very good. But he’s an inconsistent shooter, and even though he’s very versatile on offense, at times he leaves you wanting a little bit more.”

McDaniels entered the draft after his freshman season, but opted to return to school.