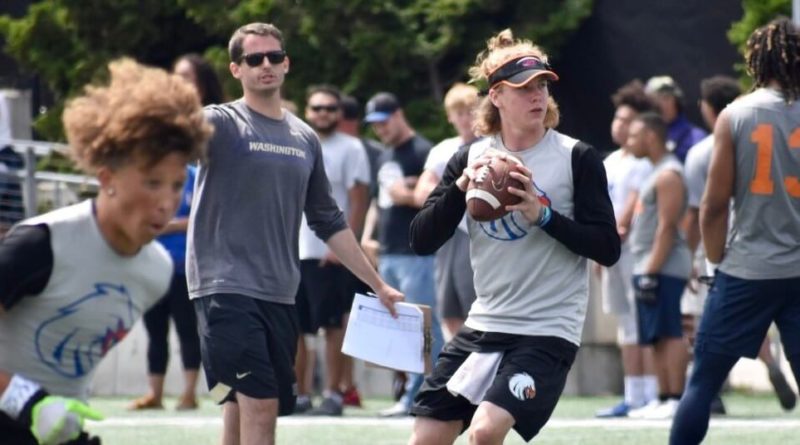 Eric Kurle knows come late October in the mud, his Graham-Kapowsin High School football team is built to truck defenses over with a power rushing attack.

He has no problem planting a seed in opponents’ minds that the Eagles can still pass a little bit, too — even with former all-state quarterback Dylan Morris now at the University of Washington.

Graham-Kapowsin just captured titles at the two most prestigious 7-on-7 passing-league tournaments in the state — the inaugural Atavus Washington State High School Championships and the longstanding UW Passing Camp.

“They’ve got a little bounce to their step,” Kurle said. “Every time we go out, we want to go win. Those kids have gone out there and competed in those two (passing) leagues.”

At the Atavus tournament eight days ago in Bellevue, even though the Eagles have predominantly fared well at passing-league competitions in the past, this was their first as a team without the heralded Morris, who finished his storied prep career with 9,815 passing yards and 99 touchdowns.

But Nathan Thomas, a converted wide receiver who spent last season as Morris’ backup as a junior, led the Eagles past reigning Class 3A champion and tournament darling Eastside Catholic in the quarterfinals (after a bad loss to the Crusaders during pool play), 4A state champion Union in the semifinals and Steilacoom in the championship game.

“Losing Dylan was a big loss,” Graham-Kapowsin wide receiver Malaki Roberson said. “But Nathan was in there lighting it up.”

At the UW event Sunday, the Eagles defeated SPSL 4A rival Puyallup in the quarterfinals, Steilacoom in the semifinals and Eastside Catholic in overtime in the finals.

“Most of our guys are a little undersized,” Roberson said. “But we have a lot of skilled players.”

Roberson is the closest thing to a star college prospect the Eagles have, and could end up being a lower-level NCAA Division I recruit.

But what Kurle likes about his receiving corps is their experience. Roberson, Valentino Hansen and Eython Daughtery are entering their third season as starters.

“They play off each other,” Kurle said. “Eython is a big body who we’ve moved inside. Malaki’s quickness … and hands are incredible. And Tino is our speed guy outside.”

Throw in Jakob Merck, another speedy pass-catcher, and Julian Mason, a possession receiver who picks his spots, and the Eagles have five reliable weapons.

Thomas is a good athlete (runs 40 meters in 4.6 seconds, and can slam a basketball) at 6-foot-3, 175 pounds, and has spent the past two years working with former Bethel High School and Pac-12 quarterback Johnny DuRocher at Rise Football Academy in Puyallup.

“Yeah, I am really excited,” Kurle said. “If Nathan continues to develop, we could have a really good year.”