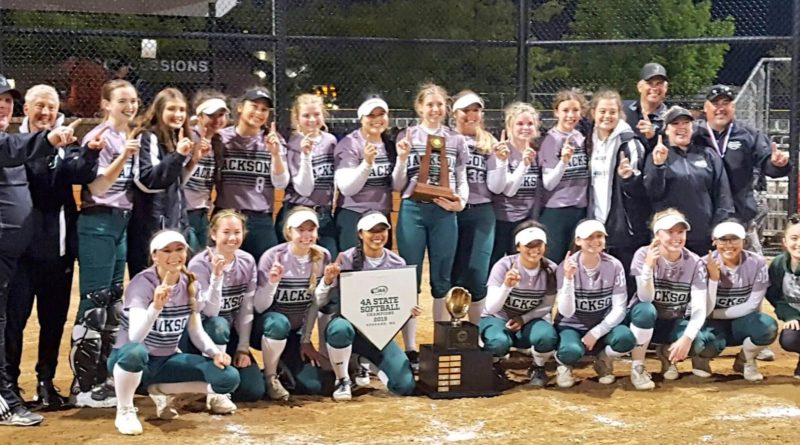 The 2019 Washington high school softball season wrapped up Saturday with six state championship games across the state. Here’s a roundup of every state title game, plus photos.

With rain wiping out most of the the first day of competition Friday at Dwight Merkel Field in Spokane, Jackson High School was faced with the task of winning four games on Saturday to repeat as state champions. And they were up to the task.

Iyanla DeJesus pitched all four games for Jackson, including the 16-2 state title-clinching win over Lake Stevens as the Timberwolves rolled to a second consecutive 4A softball state title.

Jackson’s day started at 8 a.m. with a 4-3 victory over Camas, then continued at noon with a 7-2 win over Tahoma in the quarterfinals. The Timberwolves held off Redmond 4-2 in the semifinals at 4 p.m. before taking on Lake Stevens in the championship at 7 p.m.

Garfield defeated Yelm, 10-4, to win the Class 3A state championship on a rainy Saturday afternoon at the RAC in Lacey.

And the Bulldogs became the first Seattle metro school to accomplish that feat.

Olivia Grey continued her season-long dominance, pitching a no-hitter in the title game to lift Woodland to its second consecutive 2A softball state championship.

Grey, who will pitch for Portland State next year, struck out 16 and finished the season with an ERA of 0.05.

Montesano continued its dominance at the 1A level, beating Castle Rock to claim its 10th softball state championship.

Lindsay Pace picked up the victory for the Bulldogs (22-5), who avenged a District IV title game loss to Castle Rock.

Behind the pitching of Sarah Bradshaw, Almira/Coulee-Hartline (25-1) captured its second consecutive 1B softball state championship.

Bradshaw allowed just one unearned run and six hits in a complete-game victory. Makenna Oliver had the key hit for AMC with a two-run triple.