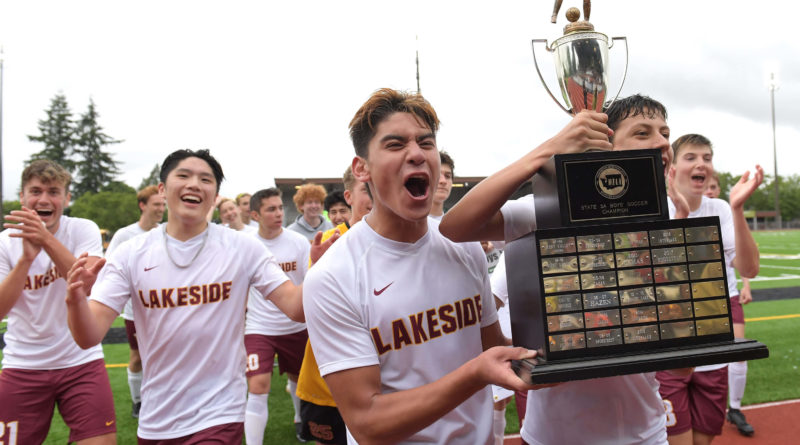 PUYALLUP — Lakeside High boys soccer reached another level in the 2019 postseason, capturing the Washington Interscholastic Activity Association’s 3A championship after shutting out Bellevue, 2-0, in the finals Saturday at Sparks Stadium.

Lakeside completed a remarkable run through the postseason, recording four shutouts en route to their second 3A state championship in five years.

“It’s unlike anything I’ve ever felt before,” Lakeside junior Joe-Joe Richard said after the win. “Winning Metro (League) is one thing, winning state is just something completely different. It’s for the seniors today.”

Lions’ senior goalie Will Johnson earned each shutout during Lakeside’s run to the top of the state. The loss was Bellevue’s (16-1-3) first of the season under new Wolverine head coach Steve Zakuani.

“The shutouts have been fantastic. With Will Johnson in goal and our back line has been super solid,” said Mark Szabo, who is in his 15th year as the Lions coach. “We did everything together and that was a big thing — just doing it as a team. That lends to a lot of those shutouts. And it creates us an opportunity to attack and have fun at that end. …It’s just an awesome dynamic.”

“We believe in ourselves. We got a great defense, a great offense – we come to play every game and that’s how we take it,” Lakeside forward Justin Blachman said.

The Lions navigated through a difficult 3A Metro League, finishing second in the league behind Roosevelt.

But it was this postseason run where the Lions truly shined as they ran roughshod through the 3A boys soccer bracket, shutting out each opponent they faced. The dominance started against Squalicum in the first round, then Stadium in the quarterfinals and Mountain View in the semis before doing the same thing to Bellevue in the championship game.

Lakeside outscored their opponents 9-0 on their march to the title.

After a drag to the start of Saturday afternoon’s game, Lakeside found little space against Bellevue’s defense. So instead of going through, the Lions decided to go over the Wolverine’s back line, giving fleet-footed forward Blachman an opportunity to put his wheels to work.

“It was just something we’ve (done) all season” Richards said. “The other forward, Justin Blachman, he just has the speed to get behind, and we know if we get him the ball behind (the defense) he’s going to put the ball in the back of the net. … It’s been one of our plays the entire season is getting him behind and it worked.”

Blachman outran every Wolverine defender before popping off a right-footed shot to the right of Wolverines goalie Jackson Buck that gave the Lions a 1-0 lead in the 19th minute.

“That’s how we scored two weeks ago, and so we knew it (the play) was on. Rafael (Otero) played me a great ball and that was it. It was 1-0,” Blachman said.

Lakeside played with better execution and more precision after capturing the lead halfway through the first half of the championship game.

The Lions jumped to a 2-0 lead in the 30th minute after Blachman swung a pass to midfielder Richardson in the middle of the box who put away a toe-tapper into the left bottom corner of the Bellevue’s net.

“Getting that second goal was vital. It kind of relieved some of that pressure,” Szabo said.

Bellevue reached the state championship game for the first time in 42 years as Zakuani installed a possession-based system that led to 16 victories. But the 2019 season, ultimately, belonged to Lakeside.

“It’s just nice to be on the banners at school and to be (considered) with some of the greats to come out of Lakeside,” Richardson said.

(Click the images to enlarge and view as a slideshow. Photos by Vince Miller.)