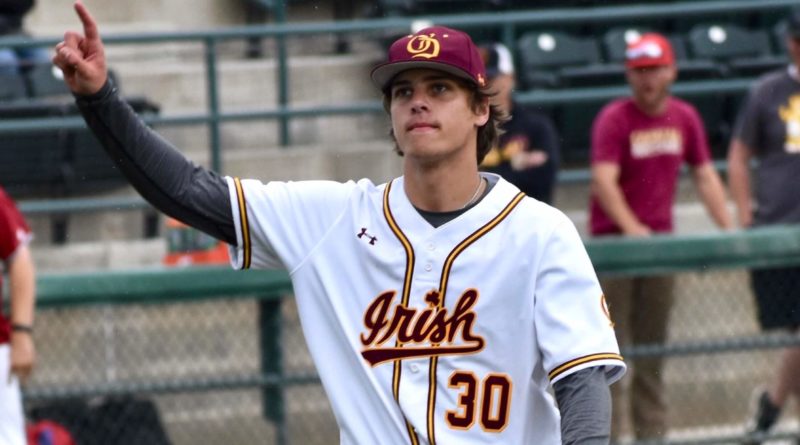 PASCO — Jake Snyder felt he’d save both his best and most memorable start for last.

The O’Dea senior and Creighton commit dealt a complete game no hitter — his first of the season — to lead the Fighting Irish to a 3-0 win over Capital in the 3A state baseball semifinals at Gesa Stadium on Friday.

And after the last out, a strikeout, Snyder turned, pointed to the sky and smiled before he was dog-piled by teammates.

“Felt amazing,” Snyder said. “You try not to think about it, but around the third, fourth inning I was kind of thinking ‘has anyone gotten a hit?’ And I just wanted to focus on getting the win, luckily that came along with it.”

Snyder dealt five strikeouts, walked three and did it in just 88 pitches.

O’Dea got on the board in the fifth inning when senior Ben Patacsil tripled to left field, scoring senior Max Samson. The Fighting Irish added two more runs after an error on a throw to first.

Right-handed pitcher Kyle Casperson, a Lower Columbia College commit, struck out three, walked four gave up an earned run for Capital, which went from finishing fifth in the 3A South Sound Conference (7-7) to the state semifinals.

Snyder said he relishes pitching duels, and watching Casperson played as a motivator.

“I think one of the things that kept me in it mentally is the fact that he was shoving just as much as I was for a lot of the game,” Snyder said

O’Dea plays the winner of Lake Washington and Gig Harbor in the the 3A state finals Saturday at 4 p.m. Capital plays the loser of that game at 10 a.m.

(Click on the images below to enlarge and view as a slideshow.)