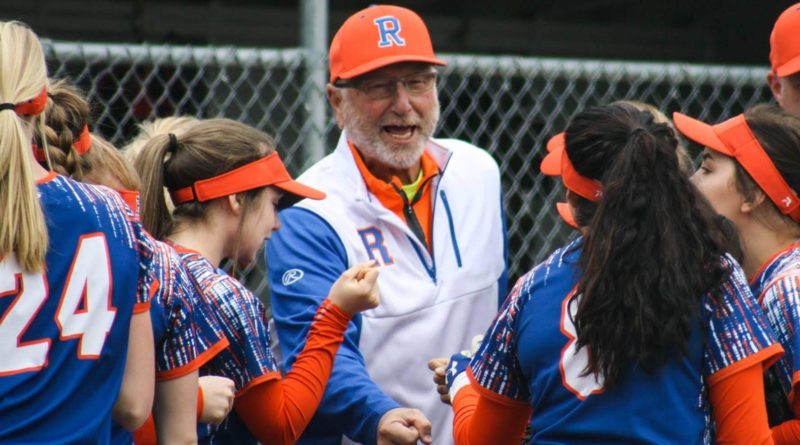 Anchors, who received a new lease on life after outliving a terminal diagnosis last August, spent much of his life coaching softball.

“Sports, especially coaching Softball has been a huge part of my life the last 30 years,” Anchors wrote last week in a farewell message posted to Facebook. “It has allowed me to go places, meet people and experience great events and Championships. The wins, losses but more importantly the lives of young female ‘student/athletes’ I have effected.”

Grief counselors were made available to students at the high school on Wednesday.

“Today is a difficult day here in Ridgefield with the passing of Coach Anchors,” Shipley said in a district release. “Dusty was truly a remarkable man who coached with passion, integrity and a deep love for the game. We will honor his legacy and continue to carry on the culture that he built here. Our thoughts are with his family and the Ridgefield softball community.”

Anchors was dealt a terminal diagnosis of stage four heart failure in December 2017 and given, by the most optimistic doctor estimates, seven months to live. Doctors told him at the time they would try to get him to July of that summer to walk his youngest daughter Kelsey Anchors (now Goodman) down the aisle at her wedding.

Despite the discouraging news, Anchors was determined to continue doing what he loved most: coach softball.

Outwardly unfazed, he returned in 2018 as Ridgefield’s head coach and was at the helm as the program made its deepest-ever run to a fifth place finish in the 2A state tournament — his best finish as a coach, too.

And the community in Ridgefield, a small but rapidly-growing city with a population around 8,000, rose to his support, raising over $5,000 for Anchors’ medical expenses.

In August, after walking his daughter down the aisle, his diagnosis was downgraded from stage four to stage two-to-three heart failure, giving him a new lease on life.

“My mental attitude,” Anchors told The Columbian in September, “I’d like to think that was a good part of it. I had the Ridgefield softball community behind me and the power of good thoughts.”

But his health waned in recent months and hospital visits became more frequent. Still, he spent much of this season as Ridgefield’s head softball coach.

“You are such an inspiration to me,” wrote Tom Christensen, the head coach of league rival Woodland. “I am a better coach, a better dad, and hopefully a better person because of the things I learned from watching you.”

That same day, the Ridgefield softball team took the day off of practice to go visit their coach one final time.

The Spudders finished second in a competitive 2A Greater St. Helens League and enter the district IV tournament Thursday as the No. 2 seed. They will play for a third-consecutive trip to state — all under Anchors. Rob Oliver, who has served as an assistant coach under Anchors, has stepped in as the interim head coach.

On Sunday, Lori Anchors, Dusty Anchors’ wife of 35 years, posted a photo to Facebook of the coach cutting a full rack of ribs, with the caption, “need I say more?”

Anchors was the head coach at Olympic High School in Bremerton for six seasons and Eastlake High School for one before moving to Southwest Washington to be closer to his daughter and grandchildren. He was a JV coach for one season at Battle Ground before landing the Ridgefield job, where he coached the last three seasons.

Heart issues followed him through much of his life after he was exposed to Agent Orange while serving in Vietnam.

Once his kids were old enough, he began to coach softball, and would go on to coach for the rest of his life. His daughter Kelsey Goodman went on to play softball at Oklahoma State, and her father got a job in customer service at Alaska Airlines after a 30-year career in telecommunications so he could fly standby to her games.

“Please know I’m good with this decision … it’s time,” he wrote in his farewell post. “Thanks for your friendship, sharing your life with me … but it’s now time to ‘burn a little daylight!!’ “

Celebration of life details are forthcoming, according to his daughter.