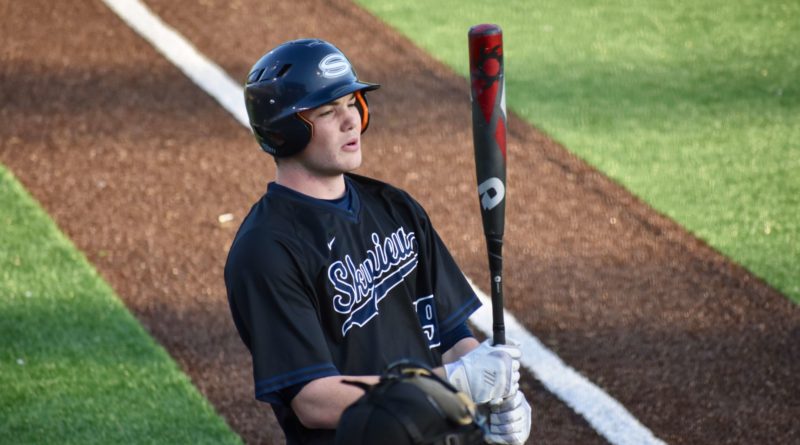 VANCOUVER — Bruce Barnum recalls looking around, semi-frantically for his son. It was the middle of a so-called “money game” at North Texas in the fall of 2015, and Portland State’s head football coach had lost track of his youngest, Cooper Barnum, amid the Vikings’ blowout win.

That was par for the course for Cooper Barnum, now a standout pitcher and defensive back for Skyview High School, and a rising power-five recruit on the mound — always taking advantage of the all-access pass afforded to him across his father’s career as a college football coach.

From a young age he was always around his father’s teams, even more so than his older brother, Brody Barnum, a former standout two-sport athlete at Skyview, now a sophomore outfielder at Washington State.

Cooper was often synonymous with his dad’s college football teams from a young age, until high school sports consumed his life. But it was those early years that set the foundation for his athletic career.

It’s also where he learned his relentless work ethic.

“He’s seen guys work,” Bruce Barnum said. “They grew up seeing guys in the weight room at the collegiate level. They see how they practice. How they get ready for practice. All of a sudden you see (Cooper) in 6th grade asking when to start power cleans. It’s like, just wait, you’re in 6th grade for chrissake.”

As the Washington high school baseball regular season comes to an end this week, No. 8 Skyview, which currently sits in second in the 4A Greater St. Helens League, readies for the postseason after reaching the 4A state semifinals each of the last two years.

Meanwhile, Cooper Barnum continues to work his way back into the lineup after missing part of the season with shoulder tightness in his throwing arm. In 18 innings pitched, he’s 2-1 with 11 hits, 30 strikeouts and five walks.

But the stats don’t tell the full story, according to Skyview coach Seth Johnson.

“He’s going to be a dude the moment he’s healthy and ready to go on the mound,” Johnson said. “He’s really good right now and you can tell there’s way more in the tank.

“There’s a lot of potential, but he’s ready for that level now. He’s elite on the mound.”

A heavy fastball in the upper-80s, touching 90, is Barnum’s bread and butter. That will only get better with time, says Johnson, who noted that the more athletic a player is in high school, the higher his ceiling.

Ask Cooper Barnum, and his experience on the football field has only augmented his success on the mound.

As a freshman his fastball sat around 78-79 miles per hour, he said. But after a sophomore football season in which he lifted lots of weights, worked different muscles and, he says perhaps most importantly, gave his throwing arm rest, he came into the baseball season a different pitcher.

“Come out and your arm feels ten times stronger,” Cooper Barnum said. “Taking that time off actually really benefits me personally. I come out and I’m 5-6 (miles per hour) more than freshman year and it’s the same routine. Get the break, give the arm a break then hit the weights as hard as possible. That’s kind of where I live in the winter.”

That part of his game is where his father says he learned through osmosis. By watching college athletes train in the offseason. By seeing how hard his dad’s hardest working players really worked.

Cooper Barnum couldn’t get enough of the football team environment. He was around the team more than his brother, according to their father, and tells Bruce Barnum he wants to go into coaching as a career — either football, or baseball.

Though he says he’s tried to dissuade his son in the name of job security, Bruce Barnum sees the coaching gene in his youngest.

“Cooper’s kind of the quiet-type, listens and learns more than I’ve ever seen anyone,” Bruce Barnum said. “He’s not reserved. But he just listens and he’s different.”

The way Bruce Barnum sees it, being a coaches’ kid is a difference maker in the recruiting process, too (he adds that Cooper Barnum’s mother, Shawna Barnum, is responsible for his humility).

“I’d recruit a coach’s kid if you’ve got two guys that are equal,” Bruce Barnum said. “They know expectations, they know how to work.”

Interest on the recruiting trail is beginning to heat up for Cooper Barnum, too, particularly in the Pac-12.

The texts and phone calls from high-major coaches are beginning to ramp up. He recently took an unofficial visit to Oregon. Though he says there hasn’t been much pressure at this point in the process, the first-team all-league cornerback and punter will have a tough decision to make between two sports he loves.

For now, he’s focused on working his way back into the rotation for Skyview. There’s no slowing down for Cooper Barnum.

“I definitely feel like I’m nowhere close to my peak,” Cooper Barnum said. “I’m rising up right now. But yeah, there’s no peak right now and hopefully that’s not for awhile.”