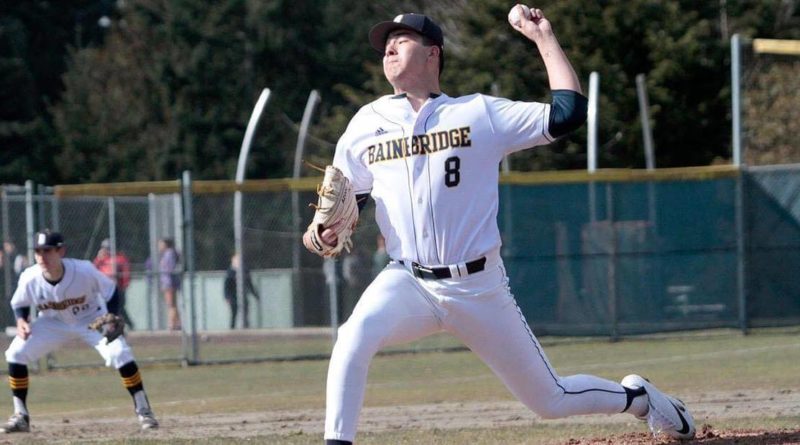 There are a number of great pitchers out there, so keep in mind that this list is not meant to be comprehensive. Let us know who should be added to the list, either by leaving a comment or by emailing andy@scorebooklive.com.

Here’s a look at the top pitchers, regardless of classification.

Spencer Anderson, LHP, Ridgefield, Lower Columbia commit
A two-time All-Region team selection by The Columbian, Anderson has been a force on the mound as a multiple-pitch guy. “He’s a big, strong young man,” Ridgefield coach Nick Allen said. “What he’s really good at is throwing strikes. Not a guy that’s lit up a lot of radar guns, but the dude can flat pitch.” Anderson, who had a 3.27 ERA, .283 opposing batting average and 1.67 WHIP as a junior, may also be a two-way player at LCC.

Will Armbruester, RHP, Eastside Catholic, New Mexico commit
Of Eastside Catholic’s standout trio of pitchers, Ambruester, a 6-foot-6 right-hander, is the team’s “power guy,” says head coach Kyle Larsen. And Armbruester boasts an 85 mile-per-hour fastball to prove it. That fares well for the Crusaders on offense, too. Larsen says the senior is one of the team’s top power hitters.

Duke Brotherton, RHP, Mercer Island, Washington State commit
As a junior, Duke Brotherton is getting his first varsity experience, but Washington State had been tracking the righty since he was a freshman. In three appearances this season, the 6-foot-3 pitcher is 2-1 with a 4.20 ERA and 18 strikeouts while allowing nine earned runs and seven walks.

Jacob Dahlstrom, RHP, Eastside Catholic
Dahlstrom helped lead the Crusaders to a third place finish in the 3A state tournament last year, tossing a six-inning shutout in the third place game. The 6-foot-7 senior has a fastball that touches 86 miles per hour, a great changeup and a breaking ball, according to Eastside Catholic coach Kyle Larsen. “Jacob’s a quiet, confident guy who goes out and gets the job done,” Larsen said. He de-committed from the University of Washington last year.

Jay Dunbar, RHP, Ballard, UCSB commit
The 6-foot-1, 190-pound senior throws hard, but the first thing that comes to Ballard coach Doug Montgomery’s mind talking about Jay Dunbar is his poise. “Cerebral,” Montgomery said. “He knows not to get frustrated … he’s got that confidence and mound presence. He can throw hard and sustain without gassing out.” That, and a fastball that can touch 91-92 miles per hour.

Jared Feikes, RHP, Lakeside, Santa Clara commit
As a junior, Feikes was a first-team all-Metro League selection and helped Lakeside make the 3A state tournament. It’s not hard to see why. He posted a 1.94 ERA, 1.06 WHIP and tossed 62 strikeouts in 36 innings pitched. The 6-foot-2, 195-pound senior has signed with Santa Clara.

Jack Folkins, RHP, O’Dea, Portland commit
Folkins, who helped lead O’Dea to a Metro League title in 2018, has been a key part of O’Dea’s talented pitching corps. The 6-foot-3, 185 pound right-hander finds has four pitches from four different arm angles, most notably his fastball with a velocity that sits between 86-88 miles per hour, according to O’Dea coach Mike Doyle, and slider change-up. He also has a couple different sliders and a curveball. Doyle describes Folkins as having a laid back, go-with-the-flow personality off the field. “Then he gets on the mound, takes the glasses off and Clark Kent turns into Superman,” Doyle said. O’Dea will work Folkins back into the rotation gradually as he recovers from a muscle tweak.

Reagan Haas, RHP, Riverside Christian, Gonzaga commit
The senior right-handed pitcher caught the eyes of Gonzaga coaches when he fanned 20 of 22 batters in a seven inning game to set a Yakima Valley strikeout record last season. This year, he’s on a similar tear. The senior has 27 strikeouts and two earned runs in 12 innings pitched.

Tyler Hoeft, RHP, Federal Way, Washington commit
A fastball that touches 90 miles per hour. A breaking ball that “at times is electric and un-hittable.” A changeup that Federal Way coach Arlo Evasick describes as “very good.” The scary thing about junior Tyler Hoeft, who committed to Washington last summer? “He hasn’t fired on all cylinders yet,” Evasick said. “If he’s on he gets a chance to beat anybody we play. Everything moves, fastball moves like crazy, lot of late life. Slider is very good, and he’s pretty composed and he competes really well.”

Brock Jones, LHP, W.F. West, Washington commit
There’s a reason scouts with radar guns are showing up when Brock Jones pitches — over 20 times, according to W.F. West athletic director Jeff Johnson. The UW commit has a fastball that touches more than 90 miles per hour, and has stepped in as W.F. West’s dominant arm this season. So far, Jones has 32 strikeouts in 14 innings with a 2-1 record and 1.00 ERA.

Reilly McAdams, RHP, Ingraham, Washington commit
Reilly McAdams has a fastball that touches 94 miles per hour and consistently sits in the low 90s. He also has a rare fire for winning. And a unique drive. “Every big game he wants to pitch, every close game he wants to close,” Ingraham coach Dashawn Patrick said. “He wants the ball in his hands on every single game.” As a junior, McAdams, who is 6-foot-4, 205 pounds, has time to grow, but Washington saw enough when offering him last summer during the club season. Patrick, who has coached a bevy of college prospects, said players like McAdams don’t come around often.

Troy McCormick, RHP, North Mason, Saint Martins commit
A senior, Troy McCormick boasts a fastball in the high-70s and a curveball and slider in the low 70s, according to Baseball Northwest. The right-handed North Mason standout has the measurables, too, at 6-foot-2, 160 pounds. He has committed to play for Saint Martins.

Logan Mercado, RHP, Tri-Cities Prep, Oregon commit
As a junior, Mercado still has a lot of baseball ahead of him at Tri-Cities Prep. But his accomplishments run deep. The right-handed Oregon commit, whose fastball touches the high-80s — TCP coach Jason Jarrett has clocked it as high as 87 — helped Tri-Cities Prep reach the 2B state title game as a freshman, and win it for the first time in program history as a sophomore. “There are those things in life you’re just born with,” Jarrett said, “he’s got a lot of athletic talent he was born with.”

Jack Moffitt, RHP, Seattle Prep, Gonzaga
What a difference two years can make. After taking his sophomore season off, Jack Moffitt grew more than four inches and tacked on 20 miles per hour to his fastball. That raised the attention of Gonzaga, where the 6-foot-6 Moffitt will continue to grow what Seattle Prep coach Max Engel calls a “dynamic arm” that is “just continually getting better.” “First pitch I saw him throw was a 65 mph fastball that if it hit you wouldn’t wake you up from a nap,” Engel said. “All of a sudden he’s back in the picture … it’s like, ‘woah!’ “

Cole Nelson, RHP, Meadowdale, Oregon State commit
Standing at 6-foot-4, 180 pounds with a fastball that touched the low 90s last summer, it’s not hard to see what Oregon State saw in sophomore Cole Nelson. Meadowdale coach Bill Hummel describes him as a “big kid” with a “projectable body” who is “probably going to get bigger.” But Meadowdale will have to wait for Nelson, who may not see the mound this season while recovering from injuries sustained to his ankle and non throwing arm during basketball season.

Jake Snyder, RHP, O’Dea, Creighton
Snyder is part of the very talented pitching staff at O’Dea. His 6-foot-5, 225 pound frame piqued the interest of Creighton, where the senior is signed to play next year. The Kirkland native throws an 83 mile per hour fastball and a curveball/slider in the 74 mph range, per Baseball Northwest. The side-arm pitcher works a fastball, and a two-seam slider that are hard to hit, according to O’Dea coach Mike Doyle. As a teammate, Snyder embraces a leadership role. “Vocal, engaged, enigmatic,” Doyle said. “He takes on a little bit of a coaching role with some of the pitchers, he enjoys that part of it.” He helped lead O’Dea to the second round of the 3A state tournament last season.

Kelan Scanlan, RHP, Ballard, Portland commit
Years ago, a summer ball coach nicknamed Scanlan “the bulldog” for his intensity and passion. “He can singlehandedly take over a game,” Ballard coach Doug Montgomery said. “He’ll yell after he gets an out, it’s really fun to watch him work. He doesn’t back down from challenges.” A 5-foot-9 right-hander, Scanlan will hit and pitch at the University of Portland.

Trystan Vrieling, RHP, Kamiakin, Gonzaga commit
Having a strong work ethic is one thing, and Trystan Vrieling has that. The senior Gonzaga commit “lives in the gym,” per Kamiakin coach Steve Wood, and has a fastball around 86 miles per hour that will only continue to improve. But Vreiling also contributes as a leader. “He leads not just by example, but verbally in the clubhouse,” Woods said. “Huge not just for our team, but our program.” Wood also said he’s the first one to jump on the John Deere Gator after practice, and will get on teammates for not taking care of the field. His strength helps, too. “His ceiling is as high as they come,” Wood said. “I think that’s what a lot of scouts are seeing right now.

Nate Weeldreyer, RHP, Auburn Mountainview, Purdue commit
If there was any question just how good the right-handed class of 2019 pitcher was, he answered it with a 19-strikeout 85-pitch complete game no-hitter against Auburn Riverside on March 19. “He’s a pretty special kid,” Auburn Mountainview coach Glen Walker said. “If he can continue doing it, he ranks up there with the top 2-3 guys I’ve ever had.” That says a lot coming from the former high school coach of two-time Cy Young award winner and three-time World Series champ Tim Lincecum.