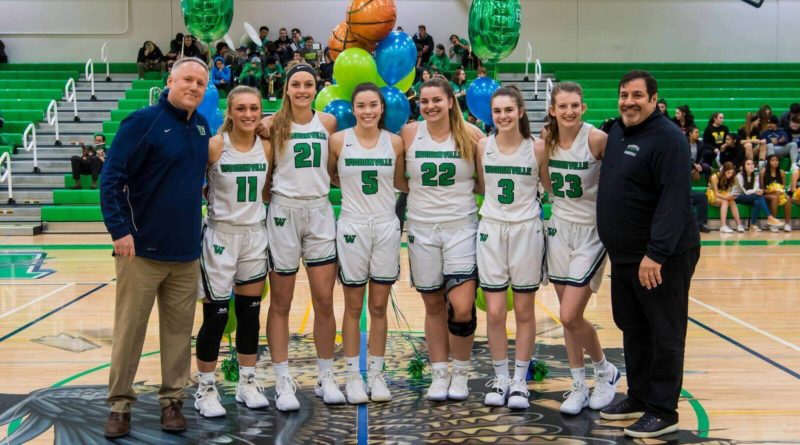 Former Central Valley girls basketball coach Freddie Rehkow, who was named the 2017-18 National High School Girls’ Basketball Coach of the Year, has been working with Scorebook Live to shine a light on girls basketball players and coaches across the state of Washington.

Rehkow recently caught up with Woodinville High School coach Scott Bullock, who is in his 13th season at the helm of the Woodinville girls program. Bullock has led the Falcons to a 21-2 record and a No. 1 ranking in the latest WIAA 4A girls basketball RPI rankings.

Ever since my playing days in high school I have wanted to stay connected to this game. I believe the desire for this connection comes from all the great people that this sport brings into my life from players, to coaches, to officials, to school administrators, to parents of players, and to those in the media. In my late 30’s, I decided it was time to reconnect with this great game and have been coaching since. I am now in my 19th year at Woodinville.

I have no coaching aspirations beyond the high school level and in the community where I live. I love going to the grocery store and seeing families and friends of the players that I coach. I love being connected to the same high school program more and more as each year passes by.  All of the camaraderie, the tradition, and closeness that comes from being part of the same program over time is a powerful influence for good in my life and the life of my family.

One of the most enjoyable parts of coaching is the deep connections you develop with other coaches.  I have been fortunate to have had two assistant coaches that were both former head coaches. They have each been tremendous mentors for me. First is Steve Segadelli who spent most of his time coaching Bishop Blanchet boy’s teams. Steve loves the game almost as much as me and his organization and mental approach have both had huge impacts on me. Steve was amazing at instilling confidence and belief in his players. Coaching girls I have found that to be one of the most vital parts of success.

Second is Sam Moscatel, who spent time at both Mercer Island and then later at Issaquah as a head boy’s coach. Sam has really helped me be a better in-game coach. His influence has been incredible. Staying poised, staying positive, not showing frustration, continuing to believe when things don’t go well early, and letting the referees do their job have all been things Sam has helped me with. My feelings for both of these guys runs deep.

Over the years, I have bought a lot of instructional videos and attended various clinics. Both of these and other coaches have always been tremendous resources for me. I also use FastDraw from FastModel sports for diagramming and sharing plays. It has been an incredible tool for preserving and sharing X’s and O’s. My most valuable resource today though is probably watching video on HUDL. The video tools accessible to today’s coaches are so amazing. We have each game broken down by HUDL Assist and it makes studying games and helping players so easy.

My most difficult and competitive coaching matchup at the high school girl’s level has been Freddie Rehkow at Central Valley.  Most of our matchups have been in summer play since Freddie coached in Spokane and I coached in Seattle. However, last season we met up twice including once in the state championship game. His Central Valley team last year was by far the best girls team I have seen while coaching at the high school level. Freddie had that team prepared both mentally and physically in every way that a high school team should be. Needless to say, they dominated us from start to finish in that final game. On a local level, our most competitive team in 4A Kingco has been Eastlake. Coach Sara Goldie has done a tremendous job with her girls over there and year in and year out we have some really intense games.

My favorite players each year are those that work the hardest and love to compete. Those players are always my best players. I love the old quote by baseball great Catfish Hunter, “Winning isn’t everything but wanting to is.” Having girls that love to compete keeps me going. I could come up with a long list of players here. This year in particular, I have a team full of girls that make the gym a great place to be.

We ran into the best female high school player I have ever seen this past December at a holiday tournament in San Diego. 6-2 Haley Jones at Archbishop Mitty, who is committed to play at Stanford next year. Not far behind are the 6-2 twins Lexie and Lacie Hull from Central Valley who are at Stanford as well.

Hometown: I always consider my hometown to be Lake Oswego, Oregon. We moved there from California when I was in 6th grade and I attended high school there. My parents still live there. Lake Oswego will always be my roots. After finishing college in 1986, I moved to Washington for a job with Microsoft. For the last 30 years I have lived in Woodinville, Washington where I have raised all five of my children. Woodinville and Seattle are now affectionately closing in on Lake Oswego as my new hometown.

High school and college: I graduated from Lake Oswego High School in 1980.  After high school, I attended Brigham Young University in Provo, Utah where I received dual degrees in Computer Science and Spanish. I later attended Seattle University while working at Microsoft and completed most of my MBA.

What sports did you play in high school? In high school I was a three-sport athlete playing basketball, football, and running track. Basketball though was by far my favorite and preferred sport. It is so much more than a game to me. Many of my deepest friendships have been formed through my time in the gym and on the hardwoods. My playing experiences as a youth are continually instrumental in shaping my adult life in almost every way.

Coaching career: I started coaching freshmen boys basketball at Woodinville in 2000 while I was still employed at Microsoft. I was working under head coach Steve Johnson who is now at Jackson in Mill Creek. In 2004, I left the boys program to work with the Woodinville girls under head coach Steve Segadelli. In 2006, I took Steve’s place as the head girl’s coach and I have been in that capacity at Woodinville ever since. I have been assisted by my good friend Sam Moscatel who comes with a rich basketball background, including playing for the legendary Ed Pepple at Mercer Island. We have been fortunate to win six KingCo 4A championships in the last 12 years at Woodinville.