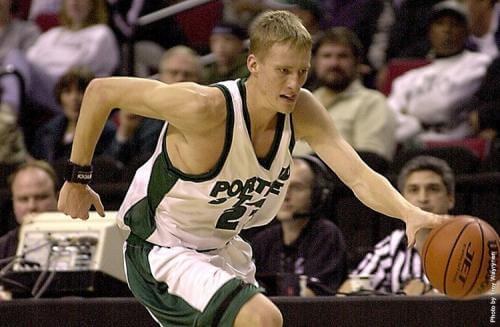 As a junior at Evergreen High School in 1995, the 6-6 guard led the Plainsmen to the large school boys basketball state championship, the first title for a SW Washington boys team since 1964. Evergreen finished 26-0, beating Sammamish in overtime at The Kingdome to win the championship.

Nesland went on to have a standout career at Portland State and was inducted into the Vikings Hall of Fame in 2006. As a senior in 1999-2000, he earned first team All-Big Sky Conference honors and was named Portland State basketball’s first-ever Academic All-American.

We recently caught up with Nesland and asked him seven questions:

What impact did your high school coach (John Triplett) have on you?

Coach Triplett gave players a lot of freedom and ownership and I think that led to our success.

I started an organization called Courts for Kids (www.courtsforkids.org), which pairs up communities in the developing world with groups from the U.S., who work together to build safe spaces for kids to play sports. We have built over 160 courts in almost 30 countries.

Do you have any advice for today’s high school players?

If you want to be a part of a championship team, you need to focus on the team culture.  Every great team culture has two things in common:

What is your opinion about AAU and high school basketball (the recruiting process in general)?

I have two kids who are playing youth basketball right now. It is crazy to witness how much more developed players are at a young age than when I grew up. There are so many more opportunities. I have concerns about burning kids out early if the passion is coming from adults rather than the player. I see a lot of dads really pushing their kids (and as a father, it is hard not to).  I think a key component to developing great all-around players is more unstructured play. I am concerned if all kids get is structured adult-driven competition, they will become robots rather than basketball players with great feel for the game. Basketball should be fun, first and foremost.

What was your favorite gym and rivalry?

Our home gym was a giant Fieldhouse. It has since been remodeled, but it was a gigantic structure divided by curtains. When the curtains were up, it had three full size courts or six smaller courts in one building. It was unlike any other gym and gave us a big advantage.

Our cross-town rival was Mountain View High School and those were my favorite games to play because of the passion involved on both sides. We had two good battles with Mercer Island my junior and senior year at the state tournament as well.