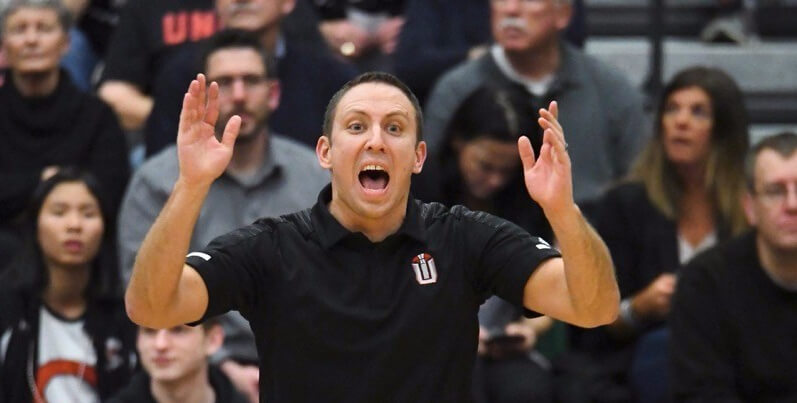 Union High School boys basketball coach Blake Conley has his team playing its best basketball of the season at the right time. The Titans are 21-0, ranked No. 1 in the 4A WIAA RPI rankings and hammered Sumner 75-52 Thursday night in a district playoff game. Union is also ranked No. 3 in our all-classification Washington Federal power rankings.

With 4A Greater St. Helens League co-player of the year Ethan Smith stretching the defense with his 3-point shooting, and 6-4 junior Tanner Toolson emerging as one of the best inside-outside threats in the state, the Titans appear headed for a showdown with Gonzaga Prep or Federal Way at the Tacoma Dome.

We recently caught up with coach Conley to ask him seven questions about his coaching background, his team and much more.

I saw what a great impact a coach can have on student athletes. I had great people to learn from in how to lead a team in a way that builds long lasting relationships while embracing the sacrifices that it takes to be a part of a team.

I never want to lose sight of why I coach: to use basketball as a way to inspire, motivate, and build lifelong relationships in my program. I aspire to have my players become better equipped to be sons, friends, husbands, workers and men, because they were a part of our basketball program. As long as I’m doing that, I will be happy in coaching.

Scott Campbell, current coach at Puyallup High School, is who I started learning how to coach from. I gained my passion for coaching while at Sehome High School with him. I am blessed to call him a friend and mentor.

I have been able to talk the game with Lynden Coach, Brian Roper, who I believe is one of the best coaches in the state. His humility and knowledge of the game are an amazing resource for me.

As he has evolved his program, Skyview Coach Matt Gruhler has been a coach who I know we must be on top of our game plan against. I know that he is watching film, scheming and thinking the game. If we are not doing the same, then we will be outworked.

Riley Hawken (‘15) at Union High School showed he was one of the best players in the state on our 3rd place team that year. Cameron Cranston was a 1,500+ scorer for us and he was the player of the year in the 4A on our 2nd place team. You can’t go wrong with either of those two! And they are now teammates at Western Oregon University.

Watching Aaron Brooks from Franklin in 2003 was something that I will not forgot. I was a high school player watching from the stands at the time. Brooks went against future Gonzaga star Adam Morrison in the state championship that year and I was blown away at his speed and ability to score from anywhere. I believe they both scored around 40 points in the state championship.