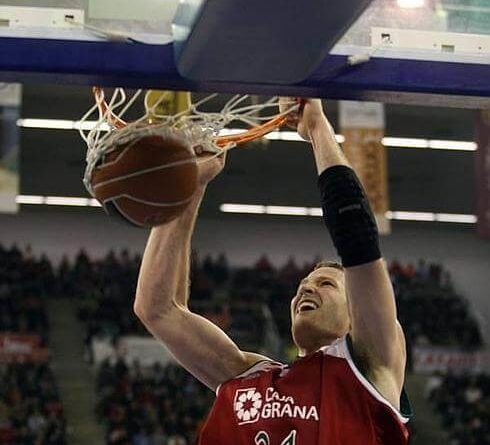 Curtis Borchardt put up astounding numbers during his Washington high school basketball career. During his senior season at Eastlake High School in 1998-99, the 7-foot center averaged 28.2 points, 14.8 rebounds and 5.4 blocks on his way to being named Washington’s Mr. Basketball.

Borchardt, 38, went on to play at Stanford, where he learned from the Collins’ twins (Jason and Jarron) for two seasons before playing a starring role for the Cardinal during 2001-02. Teaming with outside threat Casey Jacobsen, Borchardt averaged 16.9 points, 11.4 rebounds and 2.9 blocks, earning first team all-Pac 10 honors and honorable mention All-American.

Borchardt entered the 2002 NBA draft as a junior and was selected by the Orlando Magic at No. 18, then traded to the Utah Jazz. He played three seasons in the NBA — sitting out one with injuries — before embarking on a six-year pro career in Spain and France.

We recently caught up with Borchardt and asked him seven questions:

Qualifying for the state semifinals with a big win against Bellarmine Prep in the quarterfinals.

What impact did your high school coach (Richard Belcher) have on you?

Not many people outside my high school basketball program know this, but I seriously considered graduating high school early in order to get a jump on my college career. I was fed up with losing and with what I perceived at the time as a lack of commitment to excellence from my teammates (in retrospect I was primarily just a sore loser). Thankfully, Coach Belcher was hired shortly into my senior year and convinced me to play, promising me nothing other than that I would have fun. He was able to harness my tremendous drive and tough personal and team expectations to help us create a magical senior season in which we made it to the state semifinals.

First and foremost, I am a husband and father of four beautiful children. After a brief post-basketball career in commercial real estate, I attended Pacific University outside of Portland, Oregon, to earn my Doctorate of Physical Therapy in May of 2018. I now work at Stride Strong Physical Therapy which is a private practice outpatient orthopedic clinic in Hillsboro, Oregon. I am enjoying leveraging my experience as a former athlete and patient to help people overcome their physical challenges and get back to the activities they love to do.

Tough question. Nationally: Probably Zach Randolph or Amare Stoudemire at the Nike All-American camp. In Washington: I would tip my hat to all my AAU teammates that played at Mercer Island: Elliott Prasse Freeman, Josh Fisher, Tyler Besecker, Matt Logie. They were an incredible high school team with a couple of state championships under their belt. We never got the best of them and they made me work for everything on the court.

Do you have any advice for today’s high school players?

Basketball is a sport that gives you back what you put into it. To truly reach anything close to your potential you have to be willing to make the social and physical sacrifices necessary to be great. I was fortunate to have been blessed with great coaching and physical gifts, but I also put in the time to maximize my talent and work toward being a complete player. Although I was 7′ 0″ tall, I took pride in the fact that I could handle, shoot, and pass the basketball at a high level. I realize a “position-less” basketball player is not that uncommon nowadays, but developing a well-rounded game takes consistent effort that most players are not willing to commit to.

What is your opinion about AAU and high school (the recruiting process in general)?

I have really fond memories of AAU basketball. I can honestly say that they are among my most cherished basketball memories. There was something really cool about lacing up your sneakers in a hot sweaty gym with your best friends and competing against the best players. I understand that there is a shady aspect of the AAU circuit with players being exploited and directed to certain schools. With that being said, having played for many years in Europe, I grew to respect their model of player development.