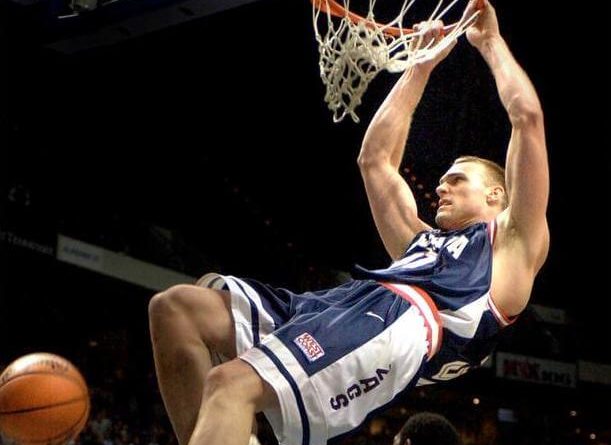 Casey Calvary was there when it all started for the Gonzaga Bulldogs in 1999. His tip-in against Florida in the NCAA Tournament propelled the underdog Zags into the Elite Eight, and the program hasn’t looked back.

Before playing a starring role for the Bulldogs, Calvary, 39, was a standout at Bellarmine Prep in Tacoma. We recently caught up with Calvary to ask him seven questions about his high school career and what he’s doing now:

The first time I stepped on the court in a varsity game was against Curtis in the 4th quarter of a preseason game. 1995 I think. There’s just nothing like the feeling of going out there and knowing you belong. I looked in the paper the next day to see my name in the box scores with the 1 beside it for the free throw I hit. A varsity point! It was awesome. Except we lost that game …

Well I played for several. Coach Fish taught me to be humble and work hard, and get good grades or I will lose my starting spot. Coach Anstett taught me continuity, more continuity, and reminded me every day that he would have shot faked and fouled me out of every game in 10 minutes. Coach Salazar taught me to care for my teammates, to lead by example, and to show up on time for team photo day even if it snows.

Quincy Wilder. Played with him some too. He was a beast. You (Dan Dickau) and Mike Johnson are right up there. Billy Brady was really good too. We used to play at Al Davies (Boys & Girls Club).

Don’t seek advice from cranky old retired basketball players. But if you do remember to make sure that basketball is giving more to you than it is taking from you.

When we played AAU there were a lot fewer traveling teams in Washington. We all knew each other and played together and against each other later in college. That made it personal and fun.

Stadium High School. I had some good friends who went to school there. DJ, Dave, Kareem that’s you guys. That made the crowd there a bit rowdy.

1998 – Gonzaga lost in the second round of the NIT (“We lost but at least we were on Oahu when it happened.”)

2006 – Played in Townsville, Australia and for Fuenlabraba in Madrid, Spain

2008 – Retired from basketball and got a normal job

2012 to present – Play for Spokane Club Open Team. (“If you are a member of the WAC and reading this, congratulations you can read, and we are going to stomp you at regionals in March.”)