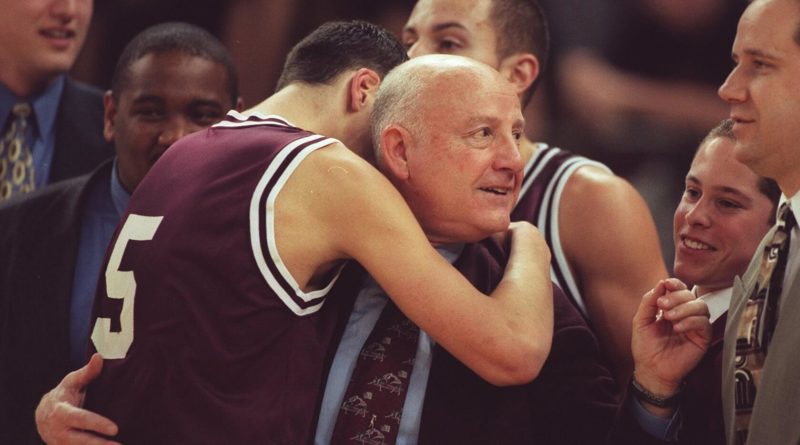 Scorebook Live’s Dan Dickau recently caught up with Washington high school basketball coaching legend Ed Pepple, who retired in 2009 after 42 years at the helm of the Mercer Island boys basketball program. Pepple, who won 952 games over his 52-year coaching career, has been inducted into multiple Hall of Fames, including the National High School Coaches Association and the Washington Interscholastic Basketball Coaches Association.

What year did you start coaching high school basketball?

I started coaching in 1957–58, following my service in the US Marine Corps and three years at the University of Utah.

How many state championships did you win?

I won four state championships: 1985, 1993, 1997, 1999. However, all of those titles were not won by me. They were won by the dedicated players who would not be denied and a team of assistant coaches who worked tirelessly, plus our animal band , our cheerleaders, our dance team and all of the tremendous support people, from stat girls, managers, custodians, trainers and a fabulous student section. It was difficult to fail with that much help.

What was your most memorable moment as a coach?

Having one sip — and my only one ever — of beer at the Roanoke Tavern on Mercer Island in March of 1985 at the insistence of my oldest son, Terry, who played for me from 1972-74. It was after we won our first state basketball championship while surrounded by dozens of my former players who had been runners-up three times and semi-finalists four more times and had suffered through 10 years of hearing “Mercer Island is good, but they can’t win the BIG ONE.” Putting that claim to rest resonated throughout our entire community and I was thrilled to watch my current and former players celebrate the 1985 championship. The former players drank beer and the championship players drank sodas. A night to remember!!

To create a basketball program which emphasized not only teaching basketball skills and strategy, but more importantly to teach and demonstrate the importance of highlighting life skills and attitudes that would prepare our young men for success, not only on the basketball court, but practice the art of teamwork and selflessness that would help them be successful in whatever endeavor they chose to follow. We developed a “recipe for success” each year, developed and crafted by the players in team meetings to help them onto the road to be the best individual and team member they could become. First person pronouns were avoided – “I, me, my and mine” – to be replaced by “we, us and our.”

Who are some of your former athletes that stood out to you during your coaching career?

This is your toughest question because I don’t like to talk in terms of who is the best. Our focus is always on team success and not individual success. Can you imagine trying to single out the best over a 52-year period and having coached literally several thousand kids – from little dribblers to state champions to all-staters to McDonald’s All- Americans? I will give you one example of greatness: Steve Hawes (6-9 center who went on to play for the University of Washington and spent 10 seasons in the NBA). I got to coach him only one year and it was a coach’s delight. His team went 21-2 and won Kingco for the first time in history. He had a one-game line of 42 points and 40 rebounds. He had a 49-point game and averaged 28 points and 20 rebounds for the season. He was the undisputed team leader and compiled his stats while being the most unselfish player on the team. He was a major reason why we were able to change the culture of Mercer Island basketball in the first year, 1968.

In addition to being a great player, a great person and a great leader Steve has never failed to be at any function where I have been honored unless it was in Maryland, Missouri or San Diego. Here is the kicker: When names are brought up about the best players in Washington state history, Steve Hawes is never mentioned.

What advice would you give other coaches in helping them develop their own recipe for success?

Coaches should coach for the players and not for their own legacy, their reputation or their self-gratification. The game of basketball, as for all sports, should be coached to help young athletes grow and become better players and better people. When that goal is reached, everyone involved is a winner. And the coach has done his job.

What are some of the personal accolades you’ve received?

I did not coach for accolades.

Editor’s note: We included a handful of Pepple’s many notable awards:

Who is your personal hero?

I was blessed to have some great ones. Here are a few:

First was my mother, Helen, who as a single parent taught me self-reliance, perseverance

independence and how to survive. I attended 20 different schools growing up in a vagabond childhood, which was a positive, not a negative. She encouraged and supported my love for sports.

My high school coach, Bill Nollan, is in the state coaches Hall of Fame. Vadal Peterson, who recruited me to the University of Utah, was the first coach to win both the NIT and the NCAA tournaments, while Jack Gardner, whom I played for at Utah my final two years is in the Basketball Hall of Fame. What tremendous resources for a young basketball coach.

Robert Hall, the former superintendent of Fife Schools, gave a rookie coach/teacher a job when no one else would, and helped me many times throughout my career.

Mac Duckworth, former Husky hoop coach who, in 1967, touted me for the Mercer Island job. And Tag Christianson, Mercer Island’s athletic director, who interviewed me on a park bench at the Seattle Center and brought me to Mercer Island in spite of less than unanimous support.

Gary Snyder was my Rock of Gibraltar all during my Islander days. He was everything that an AD should be; Gary was about the kids and helping coaches be successful.