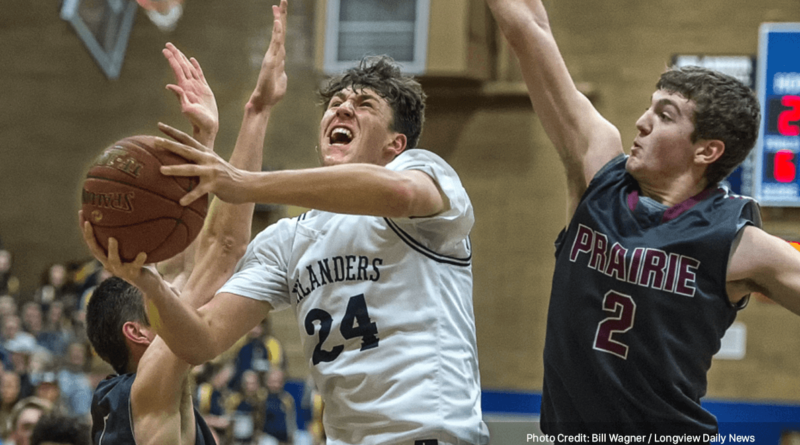 Coming off a big rivalry win over previously unbeaten Lynden, the Lynden Christian Lyncs jumped up two spots in our latest Washington Federal boys basketball power rankings. Check out the updated rankings below:

After a tough loss a few weeks ago, the Wildcats look to be back in form after winning three straight. They have two tough road games this week as they look to close out a Trico league title. King’s Way Christian stands in their way and look to play spoiler this week. A win in that game all but locks up the league title, then all eyes shift to the postseason.

The Timberwolves are new to the power rankings this week and deservedly so. They have won eight straight games and have three more league games before playoffs start. They don’t look to be slowing down anytime soon, so expect them to carry an 11 game winning streak into the playoffs.

The Cougars are new to the rankings and perhaps a little bit overdue. They have been playing some great ball and have rattled of 14 wins in a row. They are currently tied atop the South Sound league standings and two more wins this week gives them at least a share of the league title. Look for them to keep it rolling this week.

Winners of ten straight, the Chieftains have separated themselves from the rest of the 2A GSHL. They have locked up the league title and have two more games this week before playoffs kick off. This is an important week for a team riding high and two more wins would go a long way for their confidence. Look for them to be playing into early March.

The Fighting Irish are back to their winning ways, rattling off five straight victories since the return of Paolo Banchero. A healthy O’Dea is as scary as any team at the 3A level. They close out league play this week and two more wins would be a major momentum boost for a team with high aspirations come playoff time.

The Vikings have sputtered as of late and fell the furthest of any team in this weeks ranking. All is not lost though, as they head to the SPSL tournament with a chance to build some momentum before the state tournament. This team is very talented and have chance to make a deep run in the playoffs.

The Leopards rose one spot this week after another strong week. The leopards lone loss this year comes at the hands of the Lynden Lions, who up until last week were undefeated. It’s fair to say Zillah will challenge the Lynden Christian Lyncs for a 1A state title and have a good shot at winning it.

The Abes had two important wins this week that kept them in the drivers seat for a PCL title. They have two equally important games this week that ends with a game at Wilson, that will determine the final league standings for the PCL. A win gives the Abes the title outright, whereas a loss means a shared PCL title.

The Storm look to claim a share of GSHL title this week by winning both of their games. If they can hand undefeated No. 4 Union their first loss of the season they can tie for a share of the league title. A win at Union this week would give this ball club major confidence for the playoffs.

This Week: at NPSL Tournament

The Chargers have locked up the NPSL Cascade Title and head into the playoffs in great form. They look to make some noise in the NPSL tournament by handing Federal Way a loss. A win in that game would go a long way for a team looking to gain some confidence before the Road to Tacoma.

The Coyotes continue to roll, winning 17 straight. Lead by Gonzaga commit, Brock Ravet, Kittitas looks to be the favorite for the 2B State Title. One more game this week should get the Coyotes tuned up for a deep run in the playoffs.

Rainier Beach bounced back after a disappointing stretch by knocking off Blanchet at home this past week. They have a tough road test against Franklin on Tuesday before a monumental matchup against No. 2 Eastside Catholic on Thursday, that in all likelihood will crown a Metro league champ.

The Vikings sit atop the 4A SPSL standings right now, and two more road victories this week will lock up the league title. This would bea huge momentume boost for a team trying to stand out at the 4A level. Curtis has the tools to be a dark horse for a State Championship.

The Hilanders dropped a surprising game against the Prairie Falcons before bouncing back in a huge way against Evergreen. Senior guard Shaw Anderson dropped 48 points in their victory and looks determined to lead the Hilanders to state with eyes on a State Title.

This Week: at SPSL Tournament

Franklin Pierce continue to shoot up our power rankings thanks to consistently beating anyone in their way. The Cardinals have locked up a league title and head to the playoffs with high aspirations. They look to be one of the few teams at the 2A level that can really challenge Lynden for a State Championship.

The Wildcats handled business last week and have now rattled off 11 wins in a row. Lead by guard Jabe Mullins, Mount Si looks ready for the playoffs and have all but locked up a league title. They appear to be the class of the KingCo league and have their sights set on a League and State Title.

The Tomahawks might just be the hottest team in the state. Lead by 4 star Washington bound Raequan Battle, this team looks to close out the year in a strong way before gearing up for the playoffs. No team wants to see the Tomahawks on their side of the bracket.

The Lions suffered their first defeat of the season at the hands of rival Lynden Christian. After getting through the majority of the season unscathed, it’ll be interesting to see how this team rebounds from a crushing defeat. Smart money is on them to bounce back in a big way. They still look to be the leader for the 2A state title.

Two more victories last week saw the Bombers move up one spot. A team that has shown remarkable consistency shows no signs of letting up. 16 straight wins for the Bombers have them ready for the playoffs. Up to this point their senior leadership has really been the tale of the season so far.

The Wildcats showed no signs of slowing down with two more blowout wins last week.  They wrap up regular season play with two league games this week, which they should win. Their lone loss comes at the hands of No. 1 Gonzaga Prep, and that blemish came early in the season, making them one of the most dangerous teams in the state and certainly a state title contender at the 3A level.

One of the biggest games of the season took place last week, with the Lyncs knocking off crosstown rivals Lynden in what was a battle of the unbeatens. The Lyncs knocked of the Lions 75-57 in what was never really a contest. They cemented their spot as one of the best teams in the state and are heavily favored to bring home the 1A State Championship.

Two more wins for the Titans last week essentially locked up the GSHL title. One more contest against No. 17 Skyview is the only thing standing in the way of an undefeated regular season. This will be their last big test before playoffs. After that, all focus goes towards the State tournament.

This Week: at NPSL Tournament (Thursday-Saturday)

The Eagles locked up the NPSL Olympic title after taking care of business last week. They continue play this week at the NPSL tournament, looking for a high seed at state. After that, all eyes on a State Championship.

After taking care of business last week, the Crusaders have an early week game against lakeside before putting their undefeated record on the line against the Vikings from Rainier Beach. This game should settle the Metro League champion and would be a huge boost for either team heading into playoffs.

The Bullpups racked up two more wins against league foes last week. With two more league games remaining, the Bullpups can lock up a league title with wins in those games. Head Coach Matty McIntyre’s Gonzaga Prep team has racked up quality wins against Mt. Spokane, Modesto Christian (Modesto, CA), and Lake Oswego (Lake Oswego, OR). They look to be one of the elite contenders for back-to-back state titles.