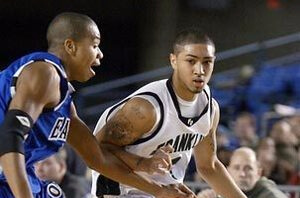 Peyton Siva was Mr. Basketball in 2009 while at Franklin High School in Seattle. He went on to have a standout career at Louisville for Hall of Fame coach Rick Pitino before a brief stint with the Detroit Pistons. The ultra-quick and competitive guard is currently playing for German power Alba Berling in the BBL and the Euroleague. Scorebook Live’s Dan Dickau caught up with him on some of his favorite memories from his high school career.

All of my high school coaches played a major role in my life, not just on the basketball court. Jason Kerr taught me how to conduct myself in interviews, how to treat and talk to my teammates, also how to play free. Kerr taught me from freshman year that everybody was the same. He talked to me the same way he would talk to a senior. Examples of keeping me grounded and humble my senior year, the freshmen would have to either sweep up the floors or put up the baskets. A lot of times he would make me do those jobs my senior year, just to let everyone know nobody is bigger than the team.
Cj was my guy. Cj helped me a lot off the court. Just life lessons outside of the game of basketball. By no means did I grow up in the toughest neighborhood in the world, but we had our fair share of violence and drug activity. Cj played the role of helping me see through it all and stay on the right path. That’s a bigger impact than anything he could have taught me on the court.
Ryland Brown. Just know whenever I have a turnover, I think of that guy. One of the smartest and sarcastic people I know. He would constantly remind me how he never had a turnover in high school at O’dea when they won the State Championship. Definitely one of the smartest PG I have ever met in my life.

Currently I play professionally for Alba Berlin in Germany.

Isaiah Thomas, Reggie Moore, Avery Bradley, Abdul Gaddy.
What is your advice to today’s high school players?
Work on your game. If you are not working someone else is. It’s a marathon not a sprint.
What is your opinion about AAU, high school (recruiting process in general)?
My opinion on AAU is that Seattle Rotary Select is the best AAU program.
What is your favorite high school gym and rivalry?
Favorite gym is Franklin High School. During my time at Franklin, I never lost a home game during the season in all four years. Favorite rivalry is Rainer Beach and Garfield High School. Which also I never lost to (Summer League doesn’t count).