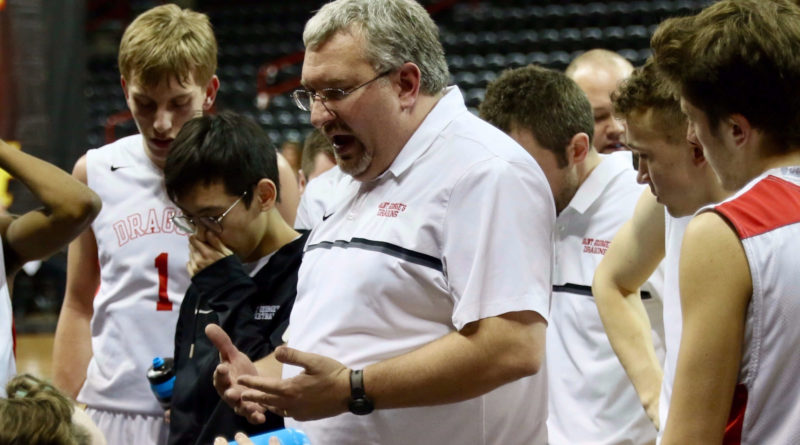 Scorebook Live’s Dan Dickau visits with Ryan Peplinski, head boys basketball coach at Saint George’s School in Spokane. A consistent power in the B levels, Peplinski has his Dragon squad looking to take home the title trophy this season at the Spokane Arena.

Coaching career: Saint George’s has been my only head coaching job. I am in my 18th year.

I think it came from wanting to be a teacher and a love of sports. I’ve loved coaching from an early age, coaching my first YMCA team when I was in middle school and my first Pony League Baseball team in high school. I loved athletics and enjoyed playing them all.

I love what I do at Saint George’s. I have had chances to move on, but love the school and community. We have great students, parents, and an outstanding culture.  I also coach with the Eastern Washington Elite with a great group coaches from the Spokane Area.  We have a very good program that puts high school sports first, while also getting kids from our area games at the highest level on the summer circuit and exposure to college coaches.

I have been blessed to work under some great coaches. My first HS coaching stint was under Mike McLaughlin, one of the best football coaches in GSL history. My first basketball job was under Jeanne Helfer at Mead High School, she had a great run of teams and one of the most dominant programs in the 90’s. When Mt. Spokane High School opened, I assisted Bill Ayers. We were able to grow the program from no seniors to a state level program. Coach Ayers is an encyclopedia of basketball knowledge. The three coaches all were very competitive and passionate about their programs. I feel like I hit the jackpot in my early coaching years.

What is the greatest coaching resource?

The best coaching resource are a few of my fellow Eastern Washington Elite coaches.  When you get to watch and be involved with so many games in the spring and summer, you pick up so many little things you can bring back to your own program.  There is a wealth of knowledge there and coaches from a variety of levels.

Reece Jenkin of Colfax always has a great plan against us.  Our teams have met 23 times since our move to the Northeast 2B/Bi-County league and every game is a battle.

This a very tough question.  I have had so many great point guards at Saint George’s and many of them played at the next level.  It is very hard to tell who the best player is, but the most dominant player I’ve had at Saint George’s is Dexter Sienko. He had over 1500 points and missed a season after breaking his leg when undercut on a dunk. Dexter was a dominant high school and college player who has been playing professionally in Germany.

Isaiah Thomas, Curtis HS. When opening the program for the state tournament it said that he averaged 37 points per game. I thought it was a typo until the opening tip came to him and he turned and hit a 35 foot shoot when he caught it. He broke the tournament scoring record in 3 games that year.