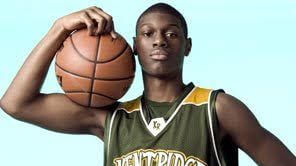 Scorebook Live’s Dan Dickau recently caught up with Gary Bell Jr., who was a standout guard at Washington’s Kentridge High School and, later, for the Gonzaga Bulldogs. Bell Jr., who was named Washington’s Mr. Basketball in 2011, helped lead Gonzaga to the Elite Eight in 2015. Over his four-year career with the Zags he averaged 9.6 points and shot 41 percent from the 3-point line.

Getting 3rd place in state my sophomore year.

The impact Coach Dave Jamison had on me was that he always held me accountable. Even though I might have been the best player on the team he made sure that I worked hard. I definitely carried that on with me when I played in college and while I’m playing professionally overseas.

Right now I am playing professional basketball in Greece.

Best player I played in AAU was Austin Rivers. Best players I played against in the state (of Washington) were Tony Wroten and Kevin Henderson. We had some great battles.

Advice I would give current high school players is continue to work but stay open minded. I know right now you’re good in your area but there is another level and you have to continue to work hard.

I like the process of AAU because it can get you more exposure than just playing on your high school team. Also most of the time you’re playing against better competition.

Favorite high school gym was Auburn Riverside because I scored my career high there (55 points). Rivalry would have to be Kentwood and Auburn High School.

Gatorade State Player of the Year (2011)